The concept of injecting gasoline directly into an engine’s cylinders was invented by Swedish engineer Jonas Hesselman in 1925. During World War II, Germany began equipping some of its fighter aircraft with direct fuel injection to prevent engine stall-out during high-speed aerial maneuvers. After World War II, domestic and import auto manufacturers discovered that their attempts to mechanically inject gasoline directly into the engine’s cylinders were extremely limited by the technology of the day.  But, despite a number of problems associated with the popular introduction of gasoline direct fuel injection (GDFI), most of the bugs seem to have been worked out and the concept has opened the door to a number of operational improvements. 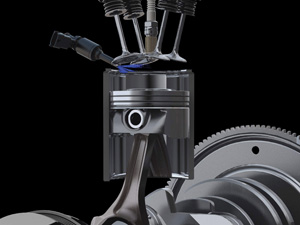 THE HISTORICAL PERSPECTIVE
Most parts professionals recall that throttle body injection (TBI) was one of the first domestic fuel injection systems to enter the market. The basic idea behind TBI is to make a fuel injection system that could easily replace the carburetor on existing engine designs. TBI required a simple computer capable of operating one or two fuel injectors that sprayed directly into the air stream entering the intake manifold. A throttle position sensor (TPS), coolant temperature sensor (CTS), manifold absolute pressure (MAP) and oxygen (O2) sensor, were the primary sensors needed to establish accurate fuel control on the engine. Fuel was delivered to the engine by an in-tank fuel pump and regulated by a fuel pressure regulator built into the TBI assembly.

Although TBI was extremely simple, fuel droplets separated from the air stream as the intake charge followed the curved outer circumferences of intake passages. The resulting “wet flow” or stream of liquid fuel following the intake passages created an uneven distribution of fuel among the engine’s cylinders.

To reduce wet flow and thus improve cylinder-to-cylinder fuel distribution, domestic auto manufacturers introduced multi-port injection (MPI) on a limited number of higher-end vehicles. As the federal government mandated stricter exhaust emissions and fuel economy standards, MPI became the fuel system of choice for all domestic and import manufacturers. To further improve fuel distribution, the fuel injection cycle on MPI configurations can be timed to occur as the engine’s intake valve opens, which further reduces the wet flow effect in the intake ports and cylinders. Unfortunately, fuel distribution inside the cylinder tended to remain uneven, which allowed minor inefficiencies in cylinder-to-cylinder fuel combustion.

DIRECT FUEL INJECTION
Because automakers must continuously respond to more stringent federal exhaust emissions and corporate fuel economy (CAFE) standards, the gasoline direct fuel injection concept has been improved to the point that this once-exotic technology is now being offered in a few popular vehicle platforms. The basic configuration of GDFI is nearly the same as conventional MPI systems. In fact, the only visible difference might be the high-pressure, mechanical fuel pump mounted on one of the engine’s overhead camshaft covers.

Most GDFI systems incorporate a conventional in-tank modular electric fuel pump that supplies normal fuel pressure to the high-pressure mechanical pump mounted on the engine. A separate fuel pump module might also be used to modulate the speed and pressure of the in-tank pump.

The high-pressure fuel pump pressure is monitored by the Powertrain Control Module (PCM) through a sensor and can be modulated by changing the volume of fuel entering the pump inlet. While specific pressures vary among different vehicle applications, most high-pressure pumps are capable of producing at least 2,000 pounds per square-inch of fuel pressure. These extremely high fuel pressure levels are required to overcome compression and combustion pressures inside the cylinder and to inject a relatively large volume of fuel directly into the cylinder in a very short length of time.

In some applications, the piston dome contains a donut-shaped indentation that shapes the incoming fuel into a “toroidal” or donut-shaped plume. When the engine is operating in a lean-burn mode, the toroidal plume allows the fuel to combust with the air in a much more controlled and efficient manner.

ADVANTAGES OF GDFI
The most immediate advantages of injecting gasoline directly into an engine cylinder are increased fuel economy and power. Because additional features like variable valve timing, variable length or “tuned” intake manifolds and turbocharging can affect how GDFI is used in specific applications, I’ll discuss the following GDFI operating modes in general terms.

A fuel-stratified injection (FSI) operating strategy can also be used to increase fuel economy. A stratified air/fuel ratio can be created by injecting a lean air/fuel mixture into the power stroke cycle immediately after the initial “rich” combustion event takes place. Because of various operating problems including exhaust valve wear, the stratified charge cycle is of limited use in most applications.

Gasoline direct fuel injection also allows engineers to actually start the engine by injecting fuel into a cylinder at rest on the power stroke. The fuel being injected into the cylinder is then ignited by the spark plug, which creates combustion pressure that forces the piston down. The next cylinder in the firing sequence takes over to keep the crankshaft turning until the engine achieves idle speed.

This aspect of GDFI allows engineers to operate the engine in a micro-hybrid mode, which allows the PCM to shut the engine off at a stoplight and then restart as foot pressure is applied to the throttle. This particular “stop-start” feature reduces the amount of fuel wasted by keeping the engine running when the vehicle is temporarily stopped.

Last, the latent heat of vaporization of the fuel being injected directly into the cylinder actually cools the piston and cylinder head surfaces. This technical dividend allows engineers to increase compression ratios from about 9.5:1 to as high as 14:1, which greatly increases horsepower and fuel economy.

CURRENT GDFI ISSUES
Because the computing capacity and speed of current PCMs has been vastly increased, most GDFI diagnostics are scan-tool based. In other words, don’t look for symptom-based diagnostics to solve problems on GDFI vehicles. When Mitsubishi widely introduced their gasoline direct injection (GDI) systems in 1996, most initial problems were caused by fuel that was incorrectly formulated for direct fuel injection systems. The most recent problem in current GDFI systems is carbon formation on the intake valve seats, which causes a loss of valve sealing which, in turn, causes cylinder misfire problems.

Because GDFI injects gasoline directly into the cylinders, the valves aren’t cleaned by incoming fuel. Most of this carbon formation is caused by oil mist exiting from the positive crankcase ventilation (PCV) system and exhaust gas recirculation (EGR) entering into the intake manifold. Last, the mechanical high-pressure fuel pumps appear to be an early failure point on current production vehicles. As with any high-pressure fuel injection system, remember that the supply pump system must also function correctly before the mechanical pump can be tested.

All parts professionals must also be aware that many manufacturers might require a complete fuel rail replacement when a single fuel injector is replaced. Because the fuel rails must safely contain at least 2,000 psi of fuel pressure, the rails and other specified parts must be replaced for safety reasons. As with any new technology, a professional-level service information system is vital for the successful diagnosis of the original problem and the completion of a successful repair.