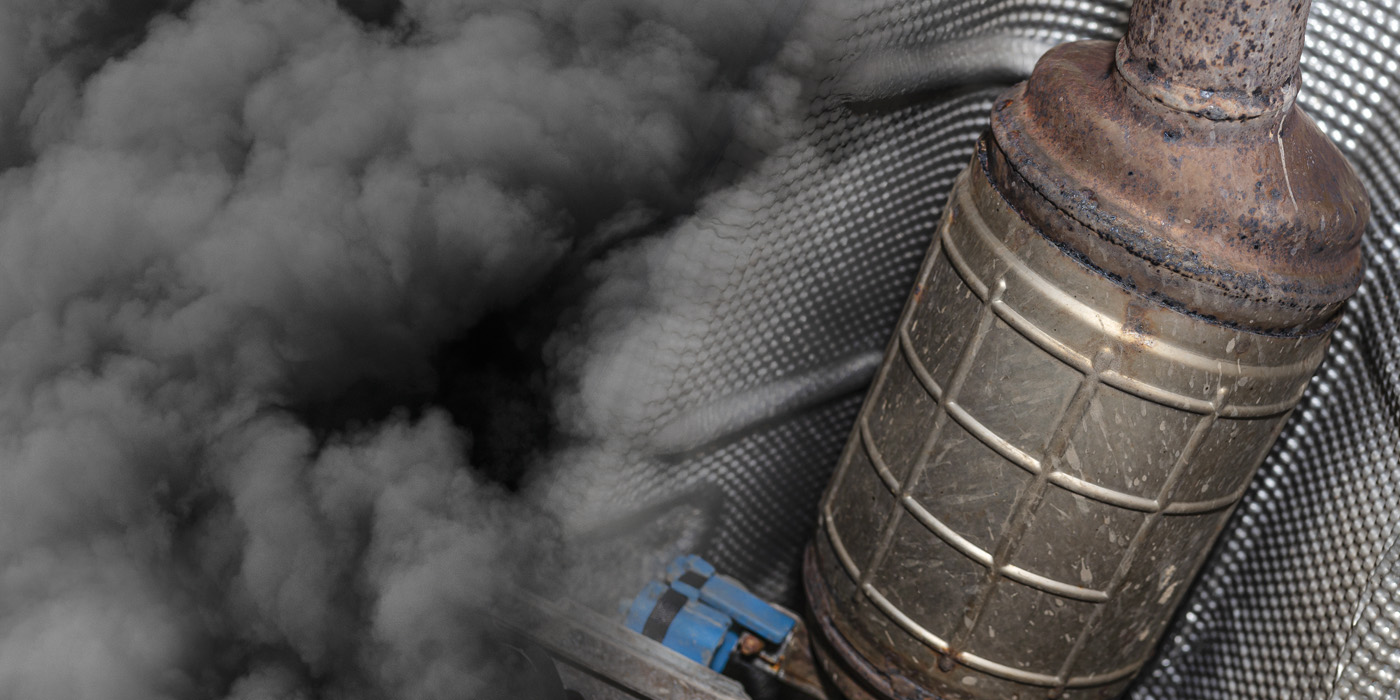 A Closer Look At Diesel-Particulate Filters

The DPF stores soot and ash to later burn it off during a regeneration cycle.

Diesel exhaust contains known carcinogens such as benzene, in addition to gases that are probable carcinogens (e.g., formaldehyde, 1,3-butadiene). Exposure to diesel exhaust also may cause problems with the respiratory system if there’s chronic exposure.

Smog can form at the ground-level ozone layer due to reactions between nitrogen oxides (NOx) and volatile organic compounds (VOCs). This is not to be confused with the stratospheric ozone layer, which protects Earth from objects and gases in space from entering our atmosphere. Vehicles contribute about half of the NOx that’s emitted, according to the EPA.

A diesel particulate filter (DPF) has been standard on diesel engines for more than a decade, and helps in reducing the harmful emissions that these types of engines create. Like a catalytic converter, the DPF is part of the exhaust system and contains some sort of a substrate material.

However, that is where the similarities end. Rather than burning off excess hydrocarbons – as the catalytic converter does with the exhaust stream of a gasoline engine – the DPF is set up to store the soot and ash created by a diesel-fueled engine. The DPF will store this soot and ash to later burn it off during a regeneration cycle.

There are three different types of regeneration cycles that are commonly used to clean out most DPF systems: active, passive and forced. Each type of regeneration cycle needs its own specific set of conditions to occur. How they occur and the convenience of their occurrence correlate inversely with how well they clean out the DPF.

You could compare these regeneration cycles to how your teenage son or daughter cleans their room. A passive clean means it’ll look OK with minimal effort. An active clean happens when they know you’re going to inspect it. It takes more effort on your part, but there’s a chance that it’s fairly clean instead of just having everything stuffed under the bed. Forced? That’s how you clean your teenager’s room. It’s going to sparkle and shine, but there will be some time and possibly some tears involved.

Passive regeneration typically is accomplished during normal drive cycles where higher loads – and therefore higher heat conditions – are present. Long hills, towing or driving at higher freeway speeds are all great opportunities for enough heat to be created to help burn off and remove ash and soot from a DPF. This happens under conditions in which the driver may never notice the DPF regeneration even happening. Ideally, this is how a DPF regeneration should happen.

Of course, there are times where conditions are not met for a passive regeneration. When this happens, the engine-management system will work to create a situation where it can perform an active regeneration cycle. During an active regeneration, the engine-management system steps up to help increase temperatures in the exhaust to help burn out any soot in the DPF. In some cases, this is done simply by putting a small amount of fuel into the exhaust where it can be burned, thus increasing the heat in the DPF to burn off any soot or ash deposits. This is the second level of regeneration, as it drastically raises the temperature of the exhaust to clean out the DPF.

Like your teenager’s room, however, a forced cleaning is sometimes necessary as well. A forced regeneration is more effective, as the conditions are more controlled. Out on the road, vehicles adapt to many changing scenarios, which is why – when running a forced regeneration – the vehicle needs to remain parked. This allows the engine-management system to go to work without interruption to manage cleaning out the DPF. Because a forced regeneration is a more advanced procedure requiring the vehicle to be parked and monitored, today’s diagnostic scan tools can monitor the process and ensure the cycle is completed effectively.

Unlike your teenager’s room, it’s more difficult to tell when things need cleaned up in a diesel particulate filter. Thankfully, the engine-management system – and particularly its DPF sensor – compares the pressure on the inlet side of the DPF with the pressure on the outlet side. If the sensor sees too much of a difference, it knows that the filter is beginning to become restricted by the amount of soot and ash that’s been trapped. It’s at this point that the engine-management system starts to look for opportunities to start a cleaning cycle.

The DPF sensor helps to tell the engine-management system what’s going on inside the DPF, but there could be other things to look out for also. If a customer says engine performance and/or fuel economy are poor, if there are higher-than-normal engine and/or transmission temperatures or if there’s an increase in black smoke emitting from the vehicle, chances are it’s time to “look under the bed” and make sure the DPF is in good working order.

A Closer Look At Diesel-Particulate Filters