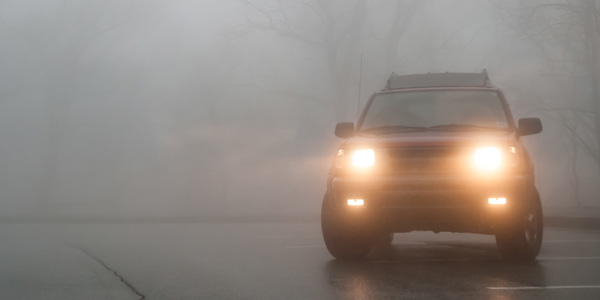 Fog lights work best at very low speeds. However, many of the deadliest accidents occur at highway speed when fog is present.

If you’ve ever driven in bad weather – we’re talking rain, snow or fog – then you know how difficult it can be to see anything in these conditions. Using your high-beam headlights won’t work in such situations, because the light reflects off the fog (or any moisture in the air).

Fog lights are different than headlights and other “driving” lights because they’re mounted low (below the bumper) to illuminate the road around you. They’re meant to be used in addition to the vehicle’s headlamps.

Fog lights work best at very low speeds. However, many of the deadliest accidents occur at highway speed when fog is present. According to a New York Times article, fog was a factor in nearly 20% of deadly multicar pileups involving 10 or more vehicles. “Deadly multicar crashes generally occur when cars and trucks traveling at interstate speed drive into what is essentially a low-lying cloud and quickly lose visibility,” James Cobb wrote in the June 2017 article. “Drivers may not see the slowed cars ahead until it is too late, with one vehicle crashing into the next, including huge tractor-trailers.”

High-quality fog lights are specifically aimed to go out and down in a broad pattern. Fog lighting can complement traditional low beams by providing additional illumination for a small area of the road underneath the fog to help the driver see road markings and other hazards. But according to some automakers, they may not even be necessary with today’s high-tech lighting. For fog lights to be effective, speeds must be significantly reduced, which is why some manufacturers are removing them. And if new technology such as lidar gets implemented, the fate of fog lights will be dim at best.

Fog lighting may be redundant on new models such as the Cadillac CT6 and others because their lights meet all of the criteria for glare. Some late-model vehicle headlights fill in the foreground with a beam pattern similar to a fog light.

Lighting experts say leaving the fog lights on during normal driving is unnecessary. While fog lights may look cool on cars and trucks (i.e., Jeeps), the reality is they are useful only in certain circumstances. The lights put off a wide, square beam that’s cut off at the top to prevent any glare from fog or moisture.

Fog lights may be useful if you live in a coastal area where fog is a real problem. Mounting a set of high-quality white fog lights that are aimed correctly will produce the best results. Externally mounted lights occasionally should be re-aimed because they can be moved out of alignment easily by road debris or curbs.

The majority of factory-mounted fog lights use halogen or HID bulbs. The bulbs are replaceable with a similar type or they can be upgraded to an LED bulb. But they can be difficult to access without removing part of the undertray or inner fender well. Aftermarket LED fog lights offer the best performance due to the electronics and the reflectors they use. With advanced optics, all the light is directed precisely where you need it. However, aftermarket lighting needs to be wired in with a separate harness, which may be more than a DIYer can handle.

Advertisement
In this article:Lighting, Tech Topics

A Dim Future For Fog Lights?