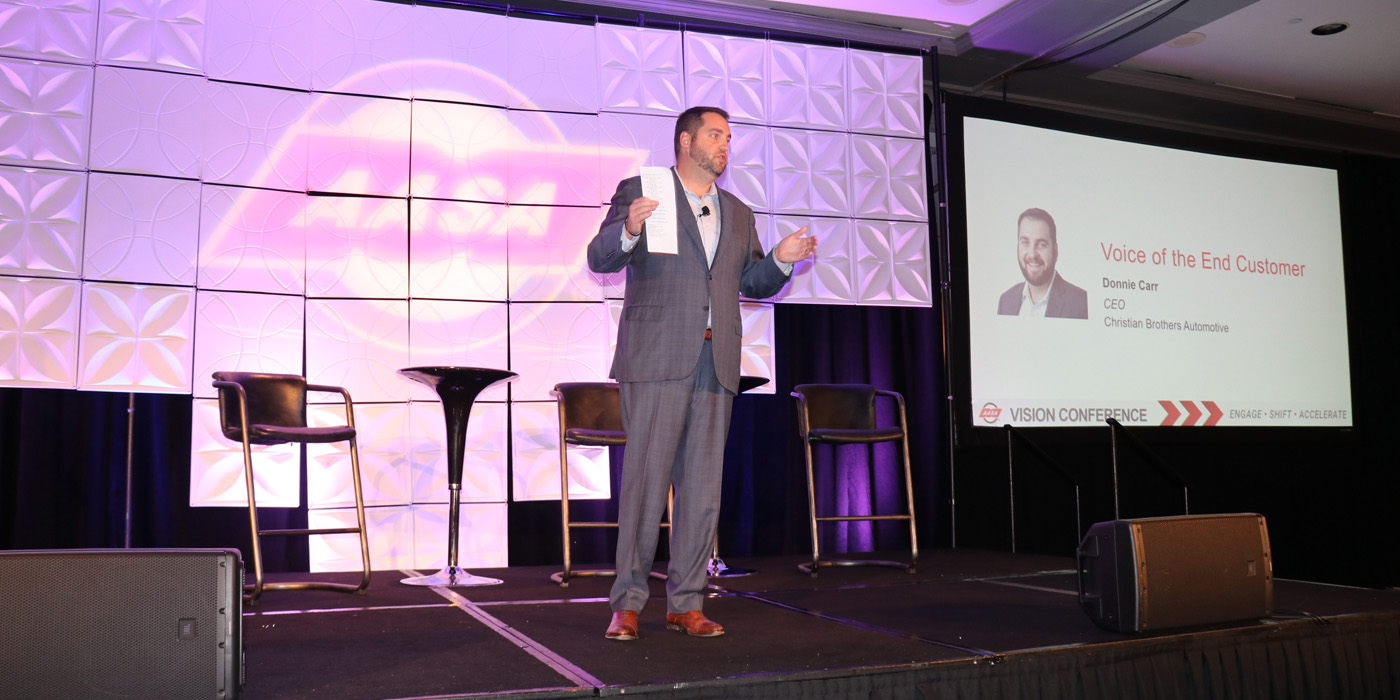 Donnie Carr provided a glimpse into the company’s people-first approach.

With more than 250 locations across the country, Christian Brothers Automotive is one of the fastest-growing independent repair chains in the United States. But don’t expect to see that number multiply to 2,000 locations – or even 1,000 – anytime soon.

Carr’s father, Mark, co-founded Christian Brothers in 1982. During the “Voice of the End Customer” session at the AASA Vision Conference in Dearborn, Michigan, Carr provided a glimpse into the company’s people-first philosophy, which is anchored in “the desire to love our neighbor as ourself.”

“And so at Christian Brothers Automotive, our passion, our desire, is that no matter how long you spend with the brand – whether it’s three days, three weeks, three years or three decades – that you leave better off than you came. We want you to be the best version of yourself. And that’s not just as a franchisee, a technician, a service writer. It’s as a parent, it’s as a spouse, it’s as a community member.”

With that as a backdrop, Carr shared his six keys to success in life. Carr said he shares these six principles twice a month during training sessions for service writers and technicians.

He also shared: “I fail at these things on a regular basis. And one of the things that I love is talking about it, because it’s great accountability for me to attempt to do these things.”

Carr referenced leadership guru John Maxwell, who has said that out of 100 people, 99 are problem spotters, and one is a problem solver. “In life, if we can be that problem solver, we will be that much more successful,” Carr added.

Carr offered a couple great examples. One came from a documentary he saw about golf legends Jack Nicklaus and Gary Player practicing on the driving range in the wee morning hours prior to the start of the 2020 Masters Tournament. Nicklaus and Player were the honorary starters, meaning they each hit one tee shot to begin the tournament.

“So at 5:30 in the morning, 50 degrees out in a light drizzle, these gentlemen are on the driving range, hitting practice shots,” Carr said. “Now, mind you, this is in 2020. And in 1974, they were inducted into the [World Golf Hall of Fame]. What that says to me is that these gentlemen, who have achieved excellence and still reach for it, they come prepared. They spend that little bit of time to make that effort.”

3. Always look for the opportunity in a situation.

“One of the things that’s been tough for me in life is I have two close family members who are bipolar,” Carr explained. “And I love those people, but in life it has created some additional challenges. It’s been a little extra difficult at times, but my awareness, my empathy, my ability to handle those who struggle with anxiety or depression or those with mental illnesses is so much greater now. And I am thankful for that because I know that was an opportunity for me to grow and improve as a person.”

“When you own your finances, you make the decisions and they don’t,” Carr said. “When your payments make your decisions, you’re going to make bad decisions.”

5. Surround yourself with amazing people.

“One of my favorite Proverbs is Proverbs 13:20: Whoever walks with the wise becomes wise, but the companion of fools will suffer harm. If you can surround yourself with fantastic people – people who are going to hold you accountable, speak truth and love to you – you are going to be that much more successful.”

In life, your attitude and your time are among the few things “that you have close to 100% control over,” according to Carr.

Regarding time, Carr has jettisoned the phrase “I didn’t have time” from his vocabulary. In its place, he says, “I didn’t make time.”