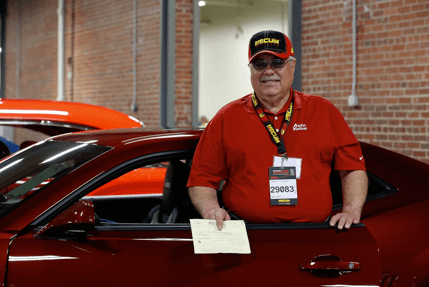 Twenty-five Auto Value/Bumper to Bumper winners in the Muscle Car Madness Sweepstakes gathered in Indianapolis, site of the Mecum’s 2016 Indy Spring Classic May 19-22 in the culmination of the promotional event. The group made up of service center operators enjoyed an automotive-themed weekend loaded with food, fun and entertainment.

The group arrived to a welcome reception and dinner that culminated with the attending service centers selecting their own lucky number to see who would win the $50,000 to bid on the car of their choice at the Mecum Auction on Saturday.

The attendees participated in a variety of entertainment opportunities suiting their personal preference including attending Indy 500 practice sessions, previewing the more than 500 cars offered for sale at the auction along with some shopping and sightseeing. That evening at a dinner event a second round of lucky numbers were drawn.

Chuck Franklin of Chuck & Meredy’s Auto Service in Big Rapids, Mich., a customer of Alliance shareholder Auto-Wares and Scott Casella of City Tire Company in Pittsfield, Mass., a customer of Alliance shareholder Hahn Automotive were selected for the coin toss that would designate the final winner. Chuck won the toss and the $50,000 while Scott took home the second place prize of $500. 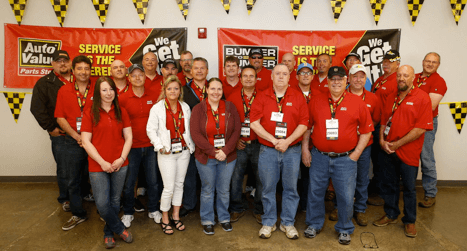 “I was stunned,” said Chuck, “I’ve never won anything like this.” He quickly recovered and set about studying the vast array of vehicles he could buy. After admiring the goods for a few hours, Chuck astutely observed that while the auction was featuring the classic Muscle Cars of the last century, “It looks to me a smart buy would be to invest in a future classic.”

And that is what he did. He won the bidding for a limited edition 2011 Camero SS, one of only 250 produced with the 545 HP six speed manual transmission. “This is a car that will only appreciate over the years,” said Chuck. “And with thanks to Auto Value, I bought it, paid taxes and commission and shipped it home with enough left over to put a dent in what I’m going to owe Uncle Sam. What a weekend!”

The Muscle Car Madness Sweepstakes began in the fall of 2015 and three previous lucky winner received vintage American Muscle Cars including a ‘69 Mustang Fastback, a ‘71 Chevelle Malibu and a ‘69 Dodge Challenger. Over the same time period, twenty-five contestants were selected to travel to Indianapolis to the Mecum Auction where the one lucky individual was selected to win the money to buy a car. There were over 100,000 entries during the promotional period.