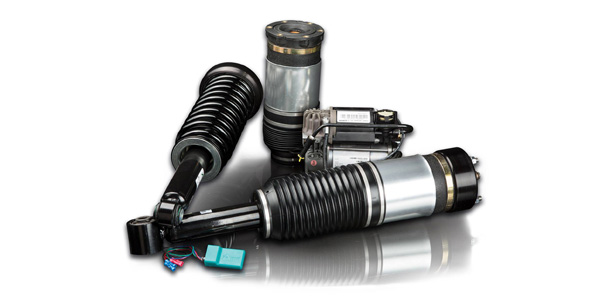 Air-suspension systems used to be the exclusive realm of luxury sedans. However, more and more OEMs are using air suspension to provide a luxury feel for SUVs and pickups. While trucks and SUVs traditionally were rough-riding utility vehicles, they’re becoming the new “luxury land yachts” for many well-to-do customers seeking smoothness and status. These systems not only offer luxurious ride quality, but some also are capable of adjusting ground clearance, and they can increase stability for towing and hauling.

A conventional coil- or leaf-spring suspension relies on rubber bushings to help isolate road shock and vibration. With hydraulic shocks and struts to dampen the oscillations of these metal springs, an air suspension effectively isolates the driver from the road on a cushion of air. At its most basic, an air-ride system consists of air bladders, a distribution system of air lines and valving and a central compressor.

Modern air-ride systems also include an electronic control module, ride-height and duty-cycle sensors and a driver interface consisting of switches and indicators. These are considerably more sophisticated systems than the old-school air shocks we used to sell, and their component replacement costs often reflect the technology involved. One of the most expensive and vulnerable components are the air bladders. Like a metal spring, these rubber bladders flex continuously while in operation. Fatigue from constant flex cycles, coupled with natural degradation (“dry rot”) over time, can lead to leakage of the bladder. Abrasion from trapped dirt, gravel and corrosion also can compromise the integrity of these air cells.

Once air begins to leak from the air strut or spring unit, the vehicle “settles” until the compressor kicks in, attempting to restore ride height by increasing the air pressure of the system back to specified levels. Constant cycling to maintain pressure and ride height can lead to overheating and eventual failure of the compressor. Modern systems have a monitoring function built into the control module, which can turn off the compressor when it senses an overheating condition, a fault in ride-height sensing or other electrical failure. It also will set a fault code in the air-ride module, and disable the system until it can be serviced. The harsh underbody environments in which these compressors live also can contribute to electrical failure. Once the compressor stops working, the signature “sag” affects not only ride quality, but also the vehicle’s stability and handling.

Air struts, air shocks and air springs are available for many popular applications, as are some compressors and control modules. But sometimes the customer isn’t willing to invest the extra money for an older, high-mileage vehicle. Some of these air-equipped vehicles are 20 or more years old, have limited resale value and might be on their second or third owner. For these customers, a conversion kit might be the solution. In place of the air components, conventional springs, shocks or struts are installed to restore the ride height and stability. These kits are developed as a substitute for the air systems, and are intended to be replaced in pairs. In some cases, four-corner replacement is required.

Conversion kits can be a cost-effective alternative to air-ride replacement, but the original air-ride quality can’t be duplicated with conventional springs and hydraulic dampening. For a customer with a long-dead system, the improvements will be significant. But if the customer expects “as-new” air-ride quality from a conversion, they’re likely to be disappointed. Many of these conversions also require disabling any remaining electronics to turn off the various warning lights and prevent the compressor (if still functional) from cycling. When selling air-suspension components, also be aware that many air-ride-equipped vehicles require disabling of the system before raising the vehicle on a lift, or may require a system reset after “wheels-off-the-ground” service. These precautions help prevent overextension of the system and damage to sensing components.

Advertisement
In this article:Chassis, Counter View, Shocks and Struts