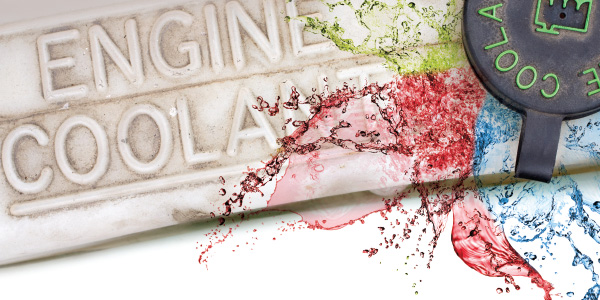 Three things that often confuse consumers about antifreeze are colors (the color of the antifreeze), the concentration (the strength or percentage of antifreeze in the coolant mixture) and how often coolant should be changed.

Three things that often confuse consumers about antifreeze are colors (the color of the antifreeze), the concentration (the strength or percentage of antifreeze in the coolant mixture) and how often coolant should be changed.

The automakers created a real problem when the marketing people got together with the engineers and decided to add colored dyes to their engine coolants. Initially, it was a good idea because it helped technicians and consumers distinguish “long-life” OAT (Organic Acid Technology) and HOAT (Hybrid Organic Acid Technology) coolants from the traditional “green” antifreeze formulas that had been used for decades. It also encouraged consumers to buy a particular color (branded) product that matched the color of the antifreeze in their cooling system when they changed their coolant. Long-life coolants typically have a service life of five years or 150,000 miles.

The proliferation of coolant colors that started more than 20 years ago continues to this day, with different brands and types of coolant often using the same or similar colors. It doesn’t help when some manufacturers say mixing different types of coolants may cause problems like coolant gelling, corrosion and engine overheating.

Except for older vehicles (like 1980s and back with soldered copper-lead radiators), and heavy-duty diesel truck engines (which require special anti-cavitation additives in the coolant), the fact is almost any OAT or HOAT-based, long-life coolants (brand-specific or “universal”) can be used in almost any late-model application, whether it is the same color or brand or not.

However, there are some caveats. One is that most coolant suppliers do not recommend intermixing different brands or types of coolant in the same cooling system. There is a slight risk of adverse interactions between different additive packages that might result in coolant gelling, corrosion or abrasion of water pump seals.

Another precaution is that some coolants may not be totally compatible with the materials used in some cooling systems. Dex-Cool antifreeze contains an organic acid called 2-EH, which may soften some nylon-filled plastics in intake manifolds and radiator end tanks. For GM applications, it’s no problem, because the cooling system materials are compatible with 2-EH. But for some other makes, it may or may not be an issue depending on the materials used in the cooling system. It should be noted that many aftermarket “universal” long-life OAT and HOAT coolants do not use 2-EH but different proprietary organic acids to prevent corrosion.

Older vehicles with copper-lead radiators should stick with a traditional green-formula (IAT or Inorganic Additive Technology) antifreeze because the phosphate and borate additives are fast-acting and provide the best short-term corrosion protection for lead soldered radiator tubes and cores. For optimum protection, the coolant should be changed every two to three years, or 30,000 miles.

Recommend “pre-mixed” antifreeze to DIY customers. Many people don’t know how to accurately mix water and antifreeze to achieve a 50/50 mix, and if they use tap water instead of distilled water, the minerals and salts in the water may shorten the life of the coolant and cause corrosion problems down the road.