The success of the event could be gauged at the outset by the numbers alone: 79 APA manufacturers and 77 shareholder members took part in the event. With guests included, about 350 people were in attendance, surpassing last year’s numbers on all three counts. 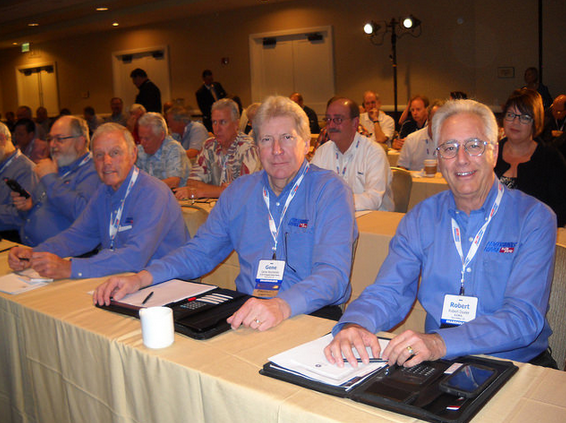 LOS ANGELES – Automotive Parts Associates’ (APA) 34th Annual Shareholders’ and Manufacturers’ Conference, held March 18-20 at the Hyatt Century Plaza, Los Angeles, lived up to its theme, “Shifting Into High Gear,” revving up attendees for another successful year and accelerating efforts to help get them there. The success of the event could be gauged at the outset by the numbers alone: 79 APA manufacturers and 77 shareholder members took part in the event. With guests included, about 350 people were in attendance, surpassing last year’s numbers on all three counts.

During the awards breakfast on Thursday morning, several APA vendors were recognized for their significant contributions to the group, with these awards:

Two new awards also were presented this year: The Cornerstone Award went to Bosch; and the Distinguished OE Partner award was presented to Denso.

Also during the awards breakfast, APA recognized shareholder S & J Industries for its longevity and dedication to the aftermarket and the APA group. In 2014, the company celebrated 30 years of business in North Hollywood, Calif.

“APA truly appreciates the vendor community that works day in and day out with its shareholders and their customers. That relationship is an important part of the mutual success we have with them,” said Gary Martin, president and CEO of APA. “We look forward to the continued growth with our vendor partners.

Later that day, during the Manufacturer One-on-Ones, APA vendors and shareholder members discussed business-related issues, new products and programs, expanded application coverage and conducted business. Thousands of dollars and gift items were given as door prizes throughout the day.

The group reconvened on Friday morning for a general session that opened with Martin announcing the results of APA’s 2015 election for its board of directors and 2015 officers. APA members elected Joseph Koudsi as a new board member. He is vice president of International Metric Specialists (IMS) located in North Hollywood, Calif., and is a member of the S.I.P.S. group.

The board of directors selected and confirmed the following 2015 Officers: Chairman, Ben Yelowitz, POJA Warehouse, L.P.;

Caprice Caster, CMP, APA director of events and promotions, provided program updates and recapped promotions, including the Exotic Driving Experience at Disney and the Win, Place, Show VIP Experience at the Kentucky Derby, and announced the winner of the SunSplash trip to Cancun, Feb. 1-5, 2016, which was awarded through a ticket drawing.

Keynote speaker John Passante, president and CEO of the Organizational Development Group, presented “Leading in the 21st Century.” Passante discussed the power of the human spirit, stressing that technology can never replace the human element in business. He offered these thoughts to help owners and managers “walk on the human side of leadership”:

– Your employees are your brand and your secret weapon; do they feel appreciated? Find ways to recognize them.

– Be a mentor and show people that you care. Rate your people skills.

– Realize that everyone seeks acceptance, attention, acknowledgement, affection and allowance.

– Have integrity; do the right things when no one is looking! And, do not sell your integrity in order to reach your business goals.

Next up was Jeff Marshall, director of business development at Pricedex Software Inc., who detailed the newly launched online supplier portal for product information exchange with APA members. The software solution from Pricedex, called the APA Pricing Portal (apapricingsolutions.com), will enable APA suppliers to upload price files, new product announcements and other marketing material that will be automatically distributed to its member companies.

Marshall added that APA is the first program group to provide its members with supplier pricing in an industry-standard format, enabling them to sell more of their vendors’ parts with quality data. And, there is no additional charge to members for this value-added offering.

Save the date for next year’s conference, slated for March 9-11, 2016, at Walt Disney World in Orlando, Fla.

APA Is ‘Shifting Into High Gear’ With 2015 Conference

Check Out The February Issue Of Counterman Magazine

CalAmp Launches Video Telematics System For Fleets
Connect with us