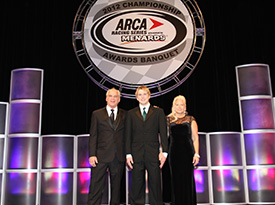 The ARCA Racing Series presented by Menards has crowned 30 ARCA national champions in 60 seasons since 1953, and has toured more than 200 racetracks in 26 states since its inception. This year, the series visited Wisconsin’s Road America for the first time.

ARCA is among the leading auto racing sanctioning bodies in the country. Founded in 1953 by John and Mildred Marcum, the organization administers more than 100 events each year in multiple racing series, including the ARCA Racing Series presented by Menards, the ARCA/CRA Super Series, the ARCA Truck Series and the ARCA Midwest Tour, plus weekly racing at Toledo and Flat Rock Speedways.

This year’s banquet will honor the 2013 series champion, as well as other top series drivers and special award winners from the 61st season in ARCA Racing Series history. It will be the second consecutive year that the banquet will be held in the Sagamore Ballroom at the Indiana Convention Center. The event is open to the public.

"It’s an honor for PRI to have the ARCA Racing Series presented by Menards schedule its post-season awards banquet in Indianapolis the week of the PRI Trade Show," said John Kilroy, producer of the PRI Trade Show. "ARCA has a long and storied heritage of excellence in racing. PRI welcomes all the great ARCA teams to Race Industry Week 2013. We have 1100 exhibiting companies who certainly want to meet up with all of them at the PRI Trade Show!"

The banquet reception will take place from 5-6:15 p.m., with the awards program scheduled to start about 6 p.m. The event is open to the public, which must buy tickets by Dec. 2. Tickets are $100.

ARCA Racing Series teams and sponsors may register and pay online at www.arcaracing.com, while non-members can contact Shalene Williams at 734/847-6726 or via email at [email protected].

Banquet attendees are encouraged to reserve hotel rooms as soon as possible, as area hotels are expected to be full in light of the events planned for Indianapolis during the weekend, including the PRI Trade Show.

More than 1,100 exhibitors will display the latest advances in racing products and race engineering at the 2013 PRI Trade Show, where thousands of racing professionals will scour the aisles to source the new technology that will be winning races next year. To pre-register for the PRI Show, click here.

In November, applications for Automotive Aftermarket Charitable Foundation (AACF) aid increased 90 percent in the wake of the unprecedented wildfires in California.

Subaru of America, the major automobile manufacturing division of Fuji Heavy Industries Ltd. Of Japan, implements an annual supplier rating program to monitor and improve the supplier base in order to maintain the highest quality of products and service.