Most emission control parts require little if any scheduled maintenance, but replacement may be necessary if the “Check Engine” light is on, the vehicle has failed an emissions test or is experiencing a drivability problem.

Most emission control parts require little if any scheduled maintenance, but replacement may be necessary if the “Check Engine” light is on, the vehicle has failed an emissions test or is experiencing a drivability problem. Emission control components include the Positive Crankcase Ventilation (PCV) valve, the Exhaust Gas Recirculation (EGR) valve, the Evaporative Emission Control System (EVAP) vapor canister and purge valves, the Catalytic Converter, Oxygen sensors and all of the engine’s other engine management sensors.
PCV valves route moisture and crankcase blowby vapors back to the intake manifold to be reburned. The PCV valve should be inspected and cleaned every 50,000 miles, or replaced as needed (if clogged or malfunctioning). 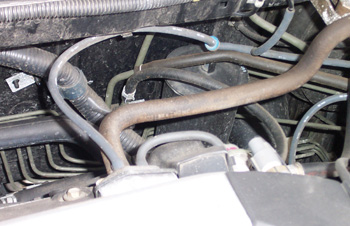 The EGR valve routes a small amount of exhaust gas into the intake manifold when the engine is accelerating or under load to reduce NOX emissions and to help prevent engine-damaging detonation (spark knock). Older vehicles typically have a vacuum-operated EGR valve while many newer vehicles have an electronic EGR valve. Some engines do not require EGR to meet emission standards. Carbon buildup around the base of an EGR valve or in the manifold ports can cause problems, as can a failure of the EGR valve itself, its control circuit or position sensor. Replacement EGR valves must have the correct flow calibration for the application.

The EVAP system (charcoal vapor canister and control valves) prevent the escape of gasoline fumes into the atmosphere. Leaky hose connections, faulty control valves or a loose or leaky gas cap can cause EVAP problems that will turn on the Check Engine light. In many cases the problem is a gas cap that is not sealing tightly. Replacing the cap solves the problem.

The catalytic converter reduces NOX, HC and CO pollutants in the exhaust. The converter is covered under a 8-year/80,000 mile emissions warranty, but may have to be replaced if it is clogged or becomes contaminated and is not operating at normal efficiency. Aftermarket replacement converters must the be the same type as the original, and OBD certified for 1996 and newer vehicles.

O2 sensors mounted in the exhaust manifolds signal the PCM if the engine is running lean (too much air) or rich (too much fuel) so the PCM can control the fuel mixture. An O2 sensor mounted behind the catalytic converter monitors catalyst efficiency. O2 sensors can fail or become sluggish with age causing a drop in fuel economy and higher emissions. Some vehicle manufacturers have a recommended replacement interval for O2 sensors but most do not. If one O2 sensor has failed, replacing all of the O2 sensors at the same time is recommended.