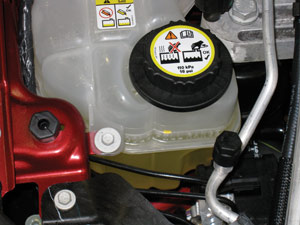 MAJOR COMPONENTS & FUNCTIONS
* Water pump — Mounted on the engine, the belt-driven pump circulates coolant between the engine and radiator. The pump has a steel or plastic impeller mounted on a shaft inside the pump housing. The pump shaft is usually supported on a ceramic bearing and seal. Leaks can be caused by seal or bearing wear.

* Thermostat — This device regulates the engine’s operating temperature. It is usually (but not always) located in a housing where the upper radiator hose attaches to the engine. The thermostat blocks the flow of coolant until the engine reaches a certain temperature (typically 195 to 210 degrees) to speed engine warm-up and reduce emissions. When the thermostat opens, coolant starts to flow from the engine back to the radiator for recirculation. The thermostat can be damaged by overheating or corrosion. If the thermostat fails to open, the engine will overheat. If it fails to close, the engine never reaches proper temperature causing an increase in emissions, blowby and engine wear. Replacement thermostats must be the same temperature rating as the original.

* Radiator — A large heat exchanger mounted in front of the vehicle. Airflow through the radiator carries away engine heat. Hot coolant from the engine enters the radiator inlet, flows through the radiator tubes, then exits the outlet to return to the engine. Most newer vehicles have aluminum radiators, while many older radiators are copper/brass. Older radiators typically used a “downflow” design where the coolant flows from the top to the bottom. Most radiators now use a “crossflow” design where the coolant flows from one side to the other. Most radiators also contain a loop of pipe inside the bottom or end tank for cooling the automatic transmission fluid. Replacement radiators must have the same dimensions as the original, and the same hose configurations. A thicker radiator or one with higher efficiency tubes and fins is recommended for towing.

* Coolant Reservoir/Pressure Tank — The coolant recovery tank on many vehicles now serves as a “surge” tank for the radiator so coolant can expand and flow back and forth as needed. The tank is pressurized the same as the radiator, and is connected to the radiator and cooling system with hoses. On these applications, the radiator cap is on the tank rather than the radiator. The cap is usually a simple twist-on filler cap with no pressure/vacuum springs or valves.

* Fan — Most late model vehicles have an electric cooling fan mounted behind the radiator to pull air through the radiator at slow vehicle speeds to improve cooling. Most older vehicles used a mechanical fan mounted on the water pump shaft to pull air through the radiator. The electric fan also runs when the A/C is on, and there may be a separate fan mounted in front of the A/C evaporator for additional cooling. Electric fans are operated by a relay, temperature sensor or switch, and a control module. Mechanical fans often have a viscous clutch that reduces fan speed at a higher rpm or when extra cooling is unnecessary to improve fuel economy. An electric fan that fails to come on, or a slipping clutch on a mechanical fan can cause engine overheating.

* Hoses — Flexible rubber hoses carry coolant between the engine and radiator, and engine and heater core. Most cooling systems have an upper radiator hose, a lower radiator hose, at least two heater hoses, and possibly other hoses to route coolant to the intake manifold, throttle, turbocharger or elsewhere. Most OEM hoses are “molded” to shape, and some have “branched hoses” where one hose connects directly to another. Hoses deteriorate with age and may leak. Loss of coolant will cause the engine to overheat. Replacement hoses must be the same diameter and length as the original.

RELATED ITEMS
* Coolant — A mixture of water and antifreeze. Most antifreeze is ethylene glycol (EG) based, but propylene glycol (PG) is another type that is also available. A 50/50 mixture of EG antifreeze and water provides freezing protection down to -34 degrees F and boilover protection up to 265 degrees F with a 15 psi radiator cap. Corrosion inhibiting additives in the antifreeze protect the cooling system against rust and electrolysis, but are used up over time requiring the coolant to be changed periodically. “Green” formula coolants typically have a recommended change interval of two to three years or 30,000 miles. “Long-life” coolants use an “organic acid technology (OAT), and can last up to five years or 150,000 miles. OAT-based coolants may be dyed orange to distinguish them from conventional green antifreeze, or dyed yellow if they also contain silicates (hybrid formulas). Replacement coolant should meet the OEM requirements for the vehicle. Universal coolants are claimed to be compatible with all makes and models.

* Belts — These include v-belts and/or serpentine belts (flat ribbed belts) that drive the water pump and other engine mounted accessories. Replacement belt length and width must match original.

* Core plugs (freeze plugs) — These are metal plugs that seal openings in the engine block and heads. May leak as a result of corrosion.

* Thermostat housing — A badly corroded housing should be replaced when changing the thermostat or upper radiator hose.

* Cooling System Sealer — Added to the coolant to temporarily stop a coolant leak. These products work well with small leaks, but will not stop a leak at the water pump or in a hose.

New hoses are usually needed when replacing a water pump or radiator.