● POSITIVE CRANKCASE VENTILATION (PCV) — Prevents crankcase blowby vapors from escaping into the atmosphere by siphoning the vapors back into the intake manifold so they can be reburned in the engine. Used since 1968 on most vehicles, the main component is a spring-loaded PCV valve that meters airflow. The PCV valve is usually mounted in a valve cover, and is connected to the intake manifold, carburetor or throttle body with a large vacuum hose. Intake vacuum pulls fresh air into the crankcase through a second breather hose. As the air passes through the engine, it picks up blowby vapors and moisture before it is pulled through the PCV valve and back into the engine. The PCV valve changes the flow rate according to engine load and throttle position. 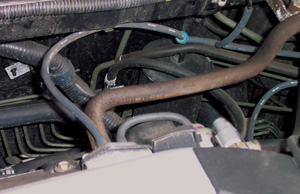 PCV helps extend oil life by removing moisture that causes sludge. If the PCV valve or hose becomes clogged, moisture can rapidly accumulate in the crankcase causing engine-damaging sludge to form. A plugged PCV may also allow pressure to build inside the engine causing oil leaks. A quick check of the PCV valve is to shake it and listen for a rattle (no rattle would indicate a blockage). Another is to pull the valve from the valve cover and feel the end for vacuum while the engine is idling (no vacuum would indicate a blockage). Recommended replacement interval is typically 50,000 miles. Some engines do not use a PCV valve for crankcase ventilation, but have a breather box that serves the same purpose.

On some older vehicles, a small PCV air filter is mounted inside the air cleaner. This filter should always be inspected and cleaned or replaced as needed on a regular basis.

● EXHAUST GAS RECIRCULATION (EGR) — Lowers oxides of nitrogen (NOX) in the exhaust by recirculating a small amount of exhaust into the intake manifold to reduce combustion temperatures. EGR is not used at idle, and only comes into play when the engine is under load or accelerating. Older vehicles typically have a vacuum-operated EGR valve on the engine that opens a port between the intake and exhaust manifolds when intake vacuum drops and/or exhaust backpressure reaches a certain level (indicating the engine is under load). Many newer vehicles have electronic EGR valves that provide more accurate control of EGR flow. A few engines do not have an EGR valve because they can meet exhaust standard without EGR.

An inoperative EGR system or EGR valve that fails to open or is clogged with carbon will increase NOX emissions and usually cause engine-damaging detonation (spark knock or pinging) when accelerating. An EGR valve that is stuck open will have the same effect as a vacuum leak and cause lean misfire, rough idle and possible stalling. Replacement EGR valves must be the correct one for the application. Calibration is very important because the flow characteristics of the valve must closely match engine requirements.

● EVAPORATIVE EMISSION CONTROLS (EVAP) — Prevents the escape of fuel vapors from the fuel tank into the atmosphere by trapping the vapors in a canister filled with activated charcoal. The vapors are stored until they can be siphoned back into the engine later and reburned. This is controlled by the PCM and a canister purge valve. Other parts of the system include vapor hose connections and the fuel tank filler cap.

On 1996 and newer vehicles, the OBD II system performs an EVAP emissions test to check for vapor leaks. If leakage exceeds a certain rate, the Check Engine light may come on. The cause may be a loose or missing gas cap in many instances. The EVAP system requires no maintenance. Most problems that occur are in the purge control valve or a leaky fuel filler cap. Replacement gas caps must be the same type as the original (caps for some older vehicles may be vented, but newer ones are sealed).

● CATALYTIC CONVERTER — Used since 1975 on all cars and light trucks to reduce tailpipe emissions by treating the exhaust after it leaves the engine. The converter is located in the exhaust system just behind the engine. Some engines have two converters (one for each side of a V6 or V8 engine), and some have four (two additional “pre-cats” in each exhaust manifold) to further reduce cold start emissions.

Inside the converter is a ceramic honeycomb or pellets coated with platinum, palladium and rhodium. These metals are catalysts and trigger chemical reactions that reduce unburned hydrocarbons (HC), carbon monoxide (CO) and oxides of nitrogen (NOX) in the exhaust. The reactions produce a lot of heat, causing the converter to run extremely hot. Older cars (pre-1980s) mostly used “two-way” converters that reduce HC and CO only. Newer vehicles use “three-way” or “three-way plus oxygen” converters that also reduce NOX. OEM converters are designed to last 100,000 to 150,000 miles under normal service.

On 1996 and newer vehicles with OBD II, a second “downstream O2 sensor is mounted behind the converter to monitor its operating efficiency. If converter efficiency drops below a certain level, it will turn on the Check Engine light. The catalyst inside a converter can be contaminated by lead (leaded gasoline), silicates (coolant leaks) or phosphorus (oil burning), reducing its efficiency. Converters also can be damaged by overheating if an engine is misfiring, leaking compression or burning oil. Severe overheating can damage or plug the converter. A plugged converter causes an increase in exhaust backpressure that may cause the engine to stall. There is no way to clean a plugged or contaminated converter, so replacement is the only option.

Aftermarket replacement converters must be the same as the original, and installed in the same location as the original. It is illegal to remove the converter from a street-driven vehicle or to replace it with a straight pipe.

● OXYGEN (O2) SENSOR — Part of the fuel feedback control system, it monitors oxygen levels in the exhaust to indicate if the fuel mixture is running rich or lean. The computer looks at the O2 sensor signal, then rebalances the fuel mixture as needed to maintain the lowest possible emissions.  The O2 sensor is mounted in the exhaust manifold (one on each side of a V6 or V8 engine). When the sensor gets hot (about 600 degrees), it starts to generate a voltage signal that changes when the fuel mixture is rich or lean. Most newer O2 sensors have an internal heater so they will reach operating temperature more quickly (reduces cold start emissions) and prevents the sensor from cooling off when the engine is idling.

There are several basic types: unheated two-wire zirconium O2 sensors, heated two or three-wire zirconium O2 sensors and heated titania O2 sensors. Many newer vehicles use a special “wide-band” air/fuel sensor that provides a more precise reading of the air/fuel mixture to the PCM. Replacement oxygen sensors must be the same as the original. Some aftermarket O2 sensors require wires to be spliced when the sensor is replaced. Others come with connectors that are the same as the OEM sensor.