Most late model cars have rack and pinion steering. This setup has a horizontal bar (the rack) that slides sideways by a pinion gear on the end of the steering input shaft. Both ends of the rack are connected to tie rods with sockets. Protective rubber or plastic bellows on the ends of the rack housing keep out contaminants. The outer ends of the tie rods are connected to the steering arms at the wheel by low friction tie rod ends. Most tie rod ends are sealed and do not require periodic greasing (though greasable tie rod ends may still be found on some truck applications). On some GM front-wheel drive cars, a “center-mount” rack is used where the rack is mounted to the firewall, and connected to arms on each front strut with tie rods that bolt to the center rather than the ends of the rack. 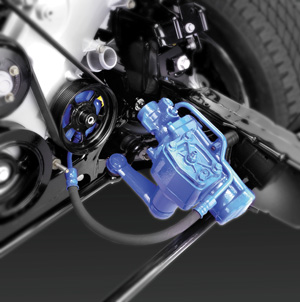 On vehicles with power rack and pinion steering (hydraulic), fluid leaks can also occur if the end seals inside the rack become worn. Fluid leaks also can occur at the rack hose connections, in the spool valve area or at the pump. Fluid inside the bellows indicates leaky seals and a need to replace the rack. The fix is to replace the leaky component. Power steering systems have two hoses, a high-pressure hose to carry pressure from the pump to the steering gear, and a low-pressure return hose. Replacement hoses may be preformed or made up using various end fittings and a crimping press. Your customer will also need power steering fluid to replace that which has been lost.

Newer vehicles with electronic steering do not have a power steering pump or hoses. Rather they use an electric motor and steering sensors to provide power-assist steering. The electric motor may be attached to the steering column or the rack. Such systems usually have their own control module.

The other type of steering system is the recirculating ball steering gear, in which ball bearings turn against a worm gear to move a pitman arm. This setup is often used on light trucks and some larger passenger cars. The steering linkage uses a “parallelogram” setup, with a center link. The pitman arm on the steering box moves one end of the center link, and the other end pivots on an idler arm. Connected to the center link are two tie rods with inner and outer tie rod ends. Steering wander and looseness can result if the idler arm bushing is worn, or the inner or outer tie rods are worn.

There are two basic types of front suspensions: short-long arm (SLA) and strut. SLA suspensions are used most often on light trucks, and have upper and lower control arms of unequal length to support the steering knuckle. Each arm is connected to the knuckle by a ball joint (one upper, one lower). Strut suspensions, by comparison, are used on most cars. A “MacPherson strut” is used in place of the upper control arm and ball joint. The strut combines a shock absorber and spring into one assembly, both supporting the weight of the vehicle and serving at the steering pivot for the knuckle. On “wishbone” strut suspensions, the strut supports the weight but an upper control arm is also used to locate the steering knuckle. On a “modified” strut suspension, the spring is located under a control arm rather than around the strut.
Shocks and struts are the most commonly replaced suspension parts due to wear. Ball joints also are a commonly replaced item. If ball joint play exceeds specifications, the joint is worn out and should be replaced. A ball joint failure can be dangerous because it allows the suspension to collapse.

Shocks and struts affect ride control, handling and overall ride comfort. After 60,000 to 75,000 miles of service, they may need to be replaced to restore or upgrade handling performance. Gas-pressurized shocks use compressed nitrogen gas to prevent the hydraulic fluid inside a shock from foaming on rough roads. This prevents “shock fade,” which is a loss of control that occurs when the fluid foams and temporarily loses its ability to dampen the suspension. Higher-pressure shocks provide greater control, while the calibration of the valving determines the relative firmness of the ride.

There are two basics types of shocks and struts: twin-tube and monotube. Twin-tube shocks have an oil reservoir around the outside of the piston chamber. Oil moves back and forth from the chamber through the valves in the end of the shock. Monotube shocks are only a single tube with no outer chamber. One end of the shock is filled with pressurized gas and a floating piston separates the gas charge from the oil. Monotube shocks are typically charged at a much higher pressure (up to 360 psi) and are used more on performance applications because of their quick-acting and firmer ride characteristics.

Shocks and struts are usually replaced in pairs or sets. Replacement shocks and struts with larger piston bores, increased gas pressure or other special features like adjustable valving can be installed to upgrade ride control performance.

Shocks are relatively easy to replace on most vehicles, but MacPherson struts usually require a spring compressor. An alternative is to sell your customer a pre-assembled complete strut assembly that comes with a new strut housing, spring and upper bearing plate, and is ready to install.