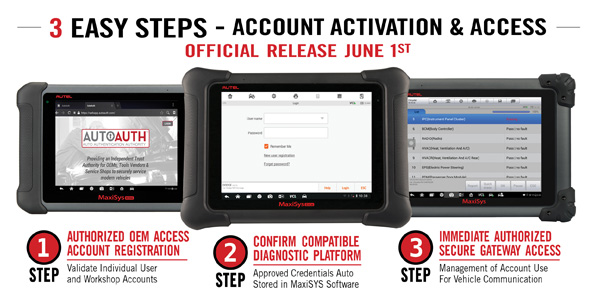 The SGW blocks unauthorized access and manipulation of vehicle networks and vital systems.

Autel US announced that starting June 1, its diagnostic scan tablets are certified by Fiat Chrysler Automobiles U.S. (FCA) to access the Secure Gateway Module on 2017 and newer FCA vehicles.

FCA started installing the SGW on some 2017 vehicles, with each subsequent year seeing increasing adoption. Nearly 100% of FCA’s 2020 vehicles are reported to have the SGW installed, Autel noted.

A firewall of sorts, the SGW blocks unauthorized access and manipulation of vehicle networks and vital systems. FCA says the SGW was developed not to restrict access to diagnostic data but rather to restrict “the ability of non-registered and non-authenticated users to perform intrusive diagnostics such as bi-directional controls.”

Beyond the prevention of bi-directional capability, which include calibrations, relearns and actuations, even the simple act of clearing a code is denied.

Autel tablet users will be able to gain access to the SGW module, and perform previously restricted actions, by registering with AutoAuth, an authentication service. Shops can register through AutoAuth’s internet-based registration portal for $50 a year, according to the company.

Up to six users can register under this initial fee, with additional users able to register for an additional nominal fee. The next step is for the shop to register its Autel tablets, up to 100 tools, on the site.

Starting June 1, Autel will “push” the software to all North American-market tablets with active software subscriptions. Users with tablets out of subscription, can purchase a Total Care Program software and warranty renewal through their authorized Autel dealer, the company noted.

Advertisement
In this article:Autel, Diagnostics