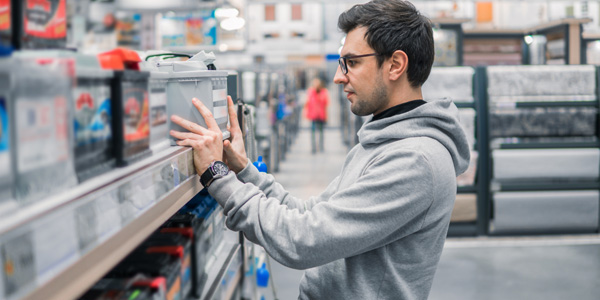 How many times have you heard a customer say, “I just need the cheapest battery that fits in my car”? In the past, we’ve been able to get away with “will-fit” batteries, as long as we met the OEM minimum recommendation for cold-cranking amperage (CCA), and the battery (more or less) fit in the tray. Today’s vehicle systems are much less forgiving when it comes to this “gimme-what-ya-got” philosophy, and providing your customer with the correct group size and type of replacement battery is more important than ever.

Selecting the appropriate battery begins with identifying the battery. This is a relatively simple catalog exercise. Most battery manufacturers encode the well-known BCI group size into their part numbering, although the DIN standard numbering system is becoming more prevalent, especially for European manufacturers. Common DIN sizes, followed by their corresponding BCI group number, are as follows:

Once the case size has been determined, it’s important to determine if the vehicle was OE-equipped with a flooded or AGM-type battery. While AGM batteries have been on the market for a number of years, counter pros often viewed them as just an “upgrade” from the stock flooded wet-cell battery found in most vehicles. With the advent of regenerative braking, alternator decoupling and stop-start, AGM has become a minimum replacement requirement for many newer vehicles.

Most parts specialists already know many of the advantages of AGM technology due to the unique construction of these batteries. The absorbed glass-mat cell offers rugged durability, vibration resistance and spill-proof and leak-proof construction, due to the electrolyte being held within the mat rather than sloshing around in liquid form.

AGM also excels when it comes to its capacity for repeated charging and discharging. During the “engine-off” portion of stop-start cycles, and during alternator decoupling, the battery is on its own to supply power to the various electronics, so the ability to discharge deeply without damage to the plates is a definite advantage.

For vehicles with regenerative braking, the kinetic energy from braking is converted to electrical energy and “recycled” back into charging the battery. AGM batteries have the capacity to absorb this energy quickly and to handle the excess energy without overcharging or overheating. For stop-start applications, the battery is called upon to re-start the vehicle repeatedly (and reliably) in stop-and-go traffic. The AGM design also offers increased cold-cranking power compared to standard wet-cell batteries.

In between the flooded wet-cell battery and the AGM is another battery technology, known as the “enhanced flooded battery,“ or EFB. These batteries share many of the benefits of an AGM, including increased durability under a wide range of states of charge/discharge, and improved charge acceptance, but usually they’re only found in “entry-level” vehicles equipped with stop-start. EFB is an excellent technology upgrade for vehicles OE-fitted with the conventional wet-cell, but it’s not an acceptable replacement for OE-specified AGM applications. AGM batteries are well-suited as a replacement for all wet-cell and EFB applications, and are a must-have for proper replacement of a failed AGM battery.

Selling (or upselling) an AGM battery is very similar to selling a customer on OE-recommended precious-metal spark plugs or synthetic oils. Overcoming the initial “sticker shock” can be even more difficult due to the AGM’s higher price point, but the approach is the same. By explaining that the longer service life, better performance and increased durability and reliability make the AGM a good value for the money, you can help the customer understand the benefits of AGM technology.

The technical features of the battery itself are less important in this scenario, as many customers don’t fully grasp the internal differences between AGM and wet-cell batteries, there are few visual differences to point out and there are no precious metals to “justify” the added cost. The technology aspects may be better addressed by pointing out that the proper AGM battery is a critical part of the overall system, and by concentrating on the unique requirements of vehicles with stop-start, regenerative-braking and alternator-decoupling technologies. For those customers who are just trying to get by with the “minimum,” these talking points help reinforce the fact that for many newer vehicles, an EFB or AGM battery IS the minimum, and that the product you’re offering is their best choice!