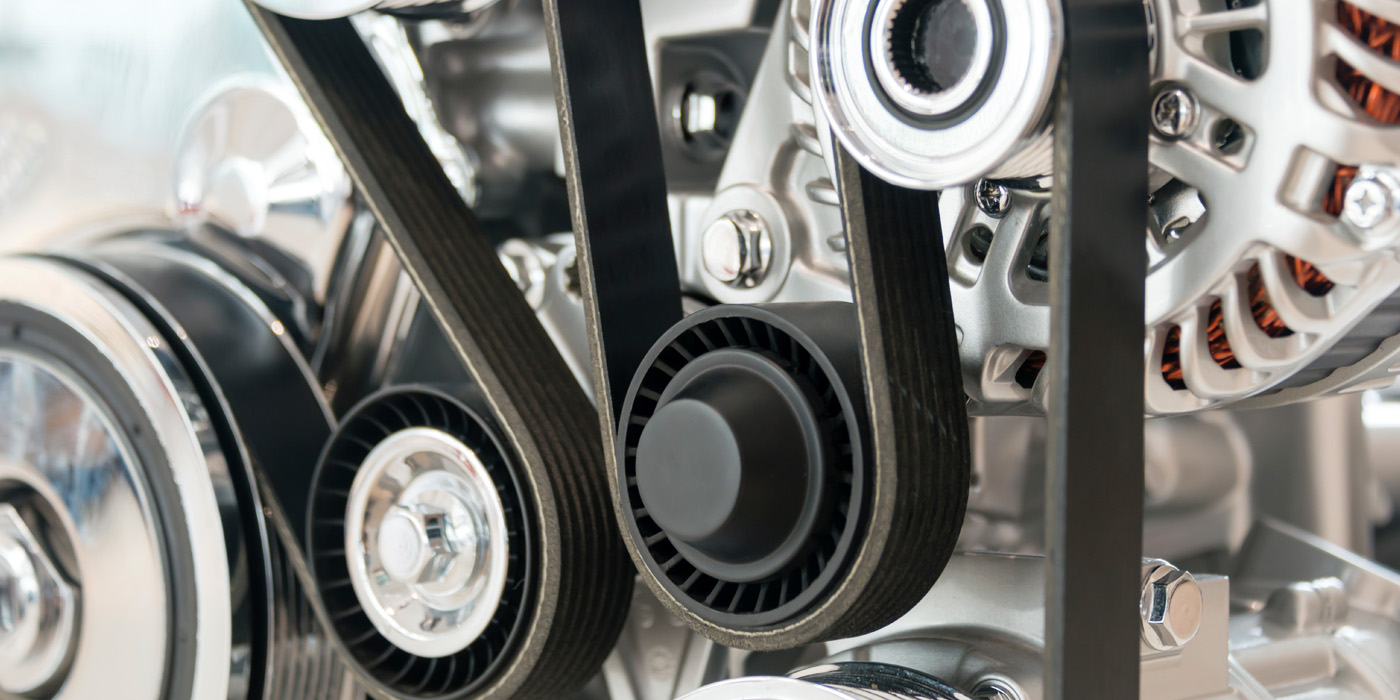 The belt-drive system is one of the hardest-working parts of the engine – especially when it’s at idle.

The belt-drive system is one of the hardest-working parts of the engine – especially when it’s at idle. Most of the belt strain happens below 1,000 rpm, from operation of the alternator, A/C compressor and power-steering pump.

Some of the forces can be absorbed by the belt slipping on the pulleys. However, the resulting friction and fluttering will take its toll over time. As the belt’s ribs begin to wear down and bottom out, the slippage gets worse until it squeals or it breaks and requires immediate attention.

Slippage causes the belt to run hot and age prematurely. If the belt doesn’t have enough tension or is loose, it may come off altogether. Too much tension and it may overload as well as put a strain on the shaft bearings on the water pump, alternator, power-steering pump and air-conditioning compressor – possibly leading to premature failures in these components.

Drive belts – called V-belts because of the way their rubber teeth are tapered – can squeal if they’re too loose and cause the alternator to charge improperly, potentially resulting in an overheated engine. One way to test the tension is to push down on the belt in the middle of its longest point. If you can depress it about half an inch, it has proper tension. But more or less than that means it’s too loose or too tight. If a belt looks cracked – or if tightening to the appropriate tension doesn’t remedy the squeal – it should be replaced.

Some vehicles have alternators with a decoupler pulley, which employs a one-way clutch to disengage the pulley. A decoupler reduces parasitic losses because it doesn’t transfer the force from the armature in the alternator as the engine revs up and down. Some decoupler pulleys have a spring and friction dampener to reduce vibration. When they wear out, they can’t absorb the same loads, and it affects the whole charging system. As a general rule, alternator decouplers and pulleys should be inspected every 10,000 miles for wear.

Most late-model vehicles use a serpentine belt to run the accessories. The name is probably derived from how it snakes its way through multiple pulleys and wraps around a tensioner. Serpentine belts are simple enough to replace with a breaker bar or long-handled ratchet with a socket or hex-key. Still, if one breaks, the vehicle will be left stranded on the side of the road, since everything from the alternator to the water pump and power steering runs off of it.

If a belt looks heavily cracked, or if the depth of the grooves becomes too shallow, it should be replaced right away. A good rule of thumb is to check them around 60,000 miles and replace them at 90,000 miles. You can use an inexpensive belt-wear gauge to check your customer’s belt wear. Or stock them to sell as an add-on item for DIY customers.

Most cars have interference engines, which means the clearance between the moving parts is so small that if they get out of time, they’ll smack into each other. The timing belt connects the crankshaft and camshaft to keep them in sync. To inspect the timing belt, you’ll have to remove the timing cover. Service intervals for these belts shouldn’t be ignored, or your customer could have a costly engine rebuild on his or her hands. Traditionally, timing belts should be replaced every 60,000 to 90,000 miles, but newer-style belts can last up to 120,000 miles – so check the manufacturer’s guidelines.

While a stretch belt looks similar to a serpentine belt, it is quite different and is not interchangeable. A serpentine belt should not be used on drives designed for stretch belts, and stretch belts should not be used on drives that use an automatic tensioner. Make sure your customer buys the correct belt for the application.  Some stretch belts may require a special tool for installation. However, some applications only use a zip tie to install. Follow the manufacturer’s instructions for proper stretch-belt installation. Extreme temperatures can be the biggest downfall of any belt, because it causes faster wear in harsh environments or heavy use. Be sure to remind your customer to inspect the belts at the beginning of summer and end of winter.