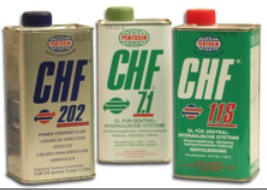 Beck/Arnley has recently added CHF 202 to broaden the coverage of its Pentosin fluid line. This new, synthetic oil-based hydraulic fluid is used on many of today’s best-known European vehicles.

Pentosin CHF 202 works extremely well with the most recent generation of hydraulic systems, including power steering, rear axle steering, hydro pneumatic suspension, stability and traction. It is recommended for Audi, Saab and Volkswagen, starting with the 2006 model year, and Volkswagen from the 2002 model year.

The new fluid has a temperature range from -40 to +130 degrees Celsius (-40 to +266 degrees Fahrenheit), which makes it the best choice for climates that are exposed to extreme temperature fluctuations.

Pentosin CHF 202 joins Beck/Arnley’s two other Pentosin offerings; CHF 11S is a synthetic oil-based fluid and CHF 7.1 is a mineral oil-based hydraulic fluid that is typically used in hydraulic systems such as power steering and shock absorbers. CHF 7.1 has a wide operating temperature range from -40 to 100 degrees Celsius (-40 to +212 degrees Fahrenheit). It is primarily recommended for older applications, and is the original fill for Volkswagen, Audi, BMW and Mercedes Benz.

Advertisement
Additional information is available at www.beckarnley.com.
Advertisement
In this article:pentosin