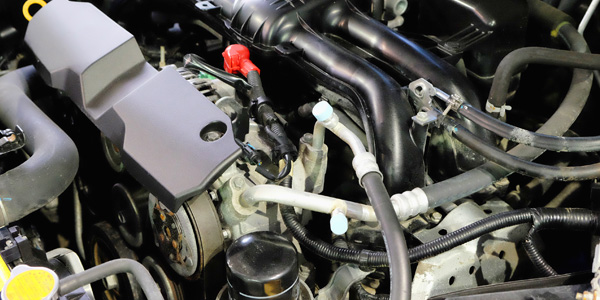 Many motorists think belts and hoses are repair parts (replace when needed) rather than maintenance parts.

Many motorists think belts and hoses are repair parts (replace when needed) rather than maintenance parts. Hoses typically have no recommended replacement interval in vehicle owner’s manuals, but serpentine belts and timing belts do. Yet many people are totally unaware that all of these parts have a limited service life.

Today’s original equipment belts and hoses are made from long-lasting, high-quality materials. Radiator and heater hoses can last up to 10 years or more, while serpentine belts and timing belts can usually go 100,000 to 120,000 miles.

Considering that the average age of passenger vehicles today is more than 11 years, there are a lot of potential belt and hose replacement sales just waiting to happen. Sooner or later they will, but it’s better to replace such parts BEFORE they fail, rather than to wait for a major problem to occur. According to AAA, a high percentage of the emergency roadside service calls they receive are for vehicles that have overheated because of a coolant leak.

Hoses always should be inspected when the coolant is changed (recommended every five years or 150,000 miles, whichever comes first), or when other repairs are made to the cooling system, such as replacing a water pump, thermostat, radiator or heater core. Any signs of coolant leakage, softening, cracking or hose deterioration signals new hoses are needed. On a high-mileage vehicle or one that is 10 or more years old, one bad hose usually signals the need to replace all of the hoses. Better to replace all the hoses at the same time than to risk another hose failure down the road.

Fuel and vacuum hoses also are long-lived but do not last forever. Ten years is probably the realistic service life for these parts on most late-model vehicles.

A leaky fuel hose can create a serious fire hazard, so any leaks should be repaired without delay. Fuel hoses always should be carefully inspected when an in-line fuel filter or fuel pump is replaced. If the hoses show cracking, any sign of leakage or damage, or are more than 10 years old, recommend new hoses – and make sure the hose has the proper pressure rating for the application. Fuel injection systems require high-pressure hoses, while emissions plumbing and older carbureted engines can use ordinary hoses.

All rubber timing belts have a recommended replacement interval, which is typically 100,000 to 120,000 miles. Not replacing a timing belt on an interference engine may turn out to be a very expensive mistake if the belt breaks and a piston bends some valves.

Most late-model serpentine belts also have a service life of about 100,000 miles. Belts made of long-lasting EPDM do not crack with age like synthetic rubber, so it’s often hard to tell the true condition of a high-mileage belt just by looking at it. The only way to know if a belt is worn is to use a gauge that checks the depth of the ribbed V-grooves on the underside of the belt. If the grooves are worn, the belt can slip and should be replaced. Make sure the replacement belt is the same length and width as the original. The automatic belt tensioner also should be checked and replaced if it cannot maintain normal tension or the pulley is noisy or has a worn bearing.

Most older vehicles such as pickup trucks, classic muscle cars, etc., have V-belts instead of serpentine belts. V-belts are not as long-lived and often crack or fray as they age. Belt life might only be 30,000 to 50,000 miles on many applications. Oil leaks also can cause the belts to slip. A worn, cracked, damaged or contaminated V-belt is a belt that needs to be replaced. A second backup belt also might be a good idea for anyone who does a lot of road trips.