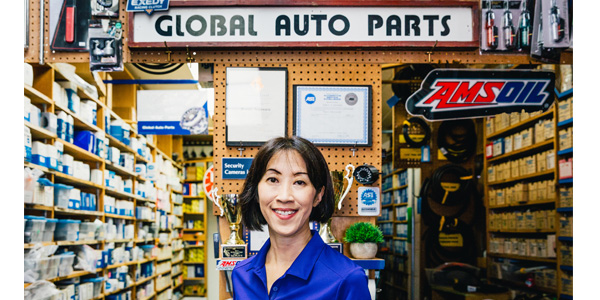 Although it was a bit of a circuitous path to get there, Sugawara says she found her “true passion.”

For Bonnie Sugawara, graduating from high school was a bittersweet moment. Her mother, Beatrice – who always dreamed Sugawara would become a pharmacist – passed away unexpectedly, just 10 days before graduation night.

With a heavy heart, Sugawara attended the University of the Pacific, working toward a Doctor of Pharmacy degree. After earning her degree in 1998, she completed a two-year postgraduate residency. But something was missing.

That “something” was the family business – Global Auto Parts in Stockton, California – where Sugawara had been working part-time since she was a teenager. Although Sugawara says she mostly enjoyed being a health care professional, she found herself drawn back to a world she’d known from an early age, when she had to stand on her tiptoes to peek over the counter.

“I knew I didn’t want to get into retail pharmacy. I was more interested in possibly teaching,” Sugawara recalls. “At the same time, I felt like I knew the parts business so much better. It was my passion, and I’d been working here since I was a little girl.”

In 2001, Sugawara came back to the world that was closest to her heart, joining Global Auto Parts as a full-time employee and leaving the health care profession behind. Today, she is the co-owner of the store, along with her father, Henry, who founded the business in 1977.

Although it was a bit of a circuitous path to get there, Sugawara says she found her “true passion.”

“I enjoy being on the front lines helping customers solve their auto parts needs. On the counter is where all the action is,” Sugawara says. “I just love being able to learn something new with every customer that I help. There’s such a variety of things to do in the retail auto parts business.”

And since Sugawara usually is the only one in the store, there’s plenty to do each day. Her dad is semi-retired at this point, and Sugawara’s other co-workers – a dog and three cats – lack the opposable thumbs to provide much help.

“I do a little bit of everything, from purchasing to inventory management to sales and marketing,” she says. “I enjoy the marketing aspect, creating videos and posts for social media.”

Sugawara also has a soft spot in heart for animals. In addition to her dog and three cats – all of whom live at the store – she takes care of a colony of more than a dozen cats outside the store. Cookie, her gregarious Siamese cat, is a prominent presence on the store’s Facebook page, and loves to interact with anyone who shops at Global Auto Parts.

“She stays on the counter and greets customers,” Sugawara says. “She loves to play with their keychains.”

These days, life isn’t easy for independent parts stores. The large retail chains continue to extend their footprint – and expand their market share – and online sellers are putting pressure on pricing and profit margins. Global Auto Parts has kept its doors open for more than 40 years by finding a niche and staying true to it. From the time the business opened in October 1977, Henry Sugawara decided to keep all SKUs on the shelves – regardless of their manufacturer popularity codes.

“We’ve always focused on import vehicles and hard-to-find parts, things that other stores might consider ‘D’ and ‘W’ – the slow movers,” Sugawara says. “We actually started carrying those from the beginning. We’ve built up quite a bit of inventory of vintage car parts and all of the oddball stuff.” 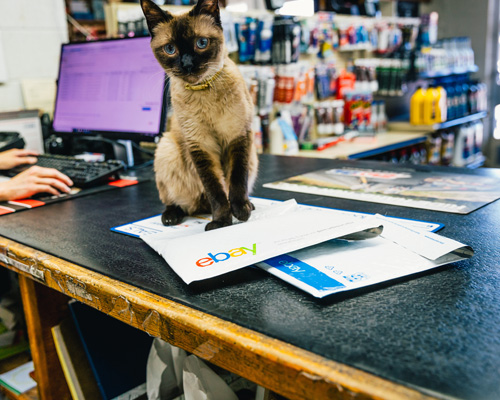 In addition to vintage and specialty parts, Global Auto Parts carries replacement parts for late-model imports, such as brake pads for a 2016 Mercedes GL 450. “We consider some maintenance parts for newer cars a little harder to find, so we try to keep those in stock,” Sugawara says.

One of the most memorable items Sugawara has sold was a new Lucas clutch master cylinder for a 1964 MGB. She sold the part to a buyer in Australia, via the store’s eBay page, after he saw the part listed for a different model year.

“He asked if by chance we had one for his ‘64 MGB. So I cracked open the good-old paper catalog. When I went to check our inventory, I was blown away to find that we actually had one on the shelf.”

Global Auto Parts has been selling items on eBay since 2010. Sugawara floated the idea to her father after the California Air Resources Board adopted a regulation banning the sale of non-self-sealing cans of R-134a automotive refrigerant within the state. The regulation, which took effect on Jan. 1, 2010, left the Sugawaras “up to our necks with cases of unsold product,” she recalls.

When their eBay store went live in May 2010, the orders trickled in at first. But three months later, Global Auto Parts had unloaded its entire inventory of refrigerant, inspiring the Sugawaras to list more parts on eBay.

“We were really surprised,” Sugawara says. “We didn’t expect it to take off like that.”

Today, Global Auto Parts has more than 1,700 items listed on its eBay store, and its eBay sales account for 25 percent of its overall revenue. The store’s all-important eBay feedback ratings are impeccable: Over the past 12 months, 100 percent of the feedback has been positive, and Global Auto Parts has earned an average five-star rating for every transaction criterion that eBay measures (the criteria are: item as described; communication; shipping time; and shipping-and-handling charges). 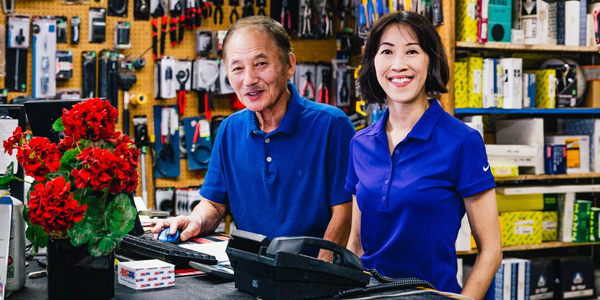 The key to happy eBay customers, Sugawara says, is good communication, and responding quickly to any questions or problems. “Courtesy goes a long way,” she says, as does “being positive, friendly and professional in all communications, whether they come through email or by phone.”

Also, it’s important to ship fast. For all orders that come in before 3 p.m., Sugawara and her dad try to ship them the same day. They even try to fill last-minute orders that come in as late as 4:45 p.m., if they can pack them up in time for the 5 p.m. pickup at the post office – which happens to be across the street from the store.

Says Sugawara: “With eBay, we try to stay focused, package and ship carefully and keep promises.”

In 2011, Henry Sugawara restructured the business as a corporation, making Bonnie an executive. It was a nod to all the time and energy she’d invested in the store over the years, and her role in growing the business, particularly through eBay sales. In August 2018, he made her president.

With 15 percent of the store’s sales coming from international buyers, Bonnie Sugawara can tell people she’s the president of a global corporation. But she hasn’t forgotten her roots as a counter professional. When she spoke with Counterman in February for this story, she’d just renewed her certification as an ASE P2 Automobile Parts Specialist. She first became certified in 1995.

“I believed in that from the beginning, especially when I was in my early 20s,” Sugawara says. “Being a woman, it was hard to prove myself. I [got certified] to force myself to study and get familiar with cars and parts and demonstrate professional competence to the public.”

Two decades after completing her Doctor of Pharmacy, she still gets an occasional offer for a pharmacy job in the mail.

“Although I’ve kept my pharmacist’s license active all these years, I’d still much rather be behind a counter selling spark plugs and water pumps than prescription medications,” she says.

Sugawara chose the parts counter over the pharmacy counter. Still, it’s safe to say her mother would be very proud.

Advertisement
In this article:Counter Profile