A total of $30,000 in Bosch Giving Track donations have been earned by Bosch-sponsored drivers to benefit their designated charities in 2016. 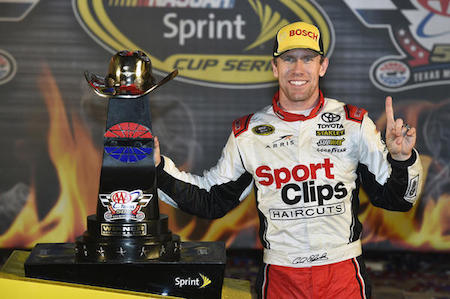 BROADVIEW, Ill. – Jimmie Johnson claimed his seventh NASCAR Sprint Cup Series Championship with a victory at the Ford EcoBoost 400 on November 20 in his Bosch-equipped, Hendrick Motorsports No. 48 Lowe’s Chevrolet SS. The newly-minted 2016 season champion solidified his place in history by tying the record held by racing greats Richard Petty and Dale Earnhardt.

In celebration of the 2016 championship title, Bosch Giving Track increased its contribution from $1,000 to $5,000. The charity selected by Hendrick Motorsports to receive its 2016 Giving Track contributions is Together We Feed, an organization focused on feeding and caring for children living in poverty.

In 2016, Bosch Giving Track touched many deserving organizations, providing a total of $30,000 in contributions to further their missions to benefit those in need, creating a positive impact in the motorsports community. Through Giving Track, Bosch contributed $1,000 to a team-specified charity each time one of its sponsored drivers secured a 2016 NASCAR Sprint Cup Series victory. Seven charities, selected by drivers from Joe Gibbs Racing, Hendrick Motorsports and Team Penske received contributions from Bosch Giving Track in 2016:

In the month of November, Bosch Giving Track contributions were also awarded to Speedway Children’s Charities following the victory by Carl Edwards at the AAA Texas 500 on November 6 and to the Joey Logano Foundation following Joey Logano’s win at the Can-Am 500 on November 13.

“2016 treated fans to another exciting year of NASCAR Sprint Cup Series racing, and we congratulate Jimmie Johnson on his record-tying seventh championship,” said Tony Pauly, director of advertising and brand management for Robert Bosch LLC, Automotive Aftermarket NA. “Bosch is proud to be a contributor to the victories of so many great teams in the motorsport arena, and to their charities.”

Bosch involvement in motorsports dates back to the early 1900s, and it has been equipping NASCAR teams with parts and technical advice since 1991. In 2012, when the NASCAR Sprint Cup Series made the move from carbureted engines to more efficient fuel injected engines, Bosch became the sport’s exclusive oxygen sensor supplier. Beginning in 2016, Bosch has expanded its agreement with NASCAR to include fuel injectors and fuel pumps.