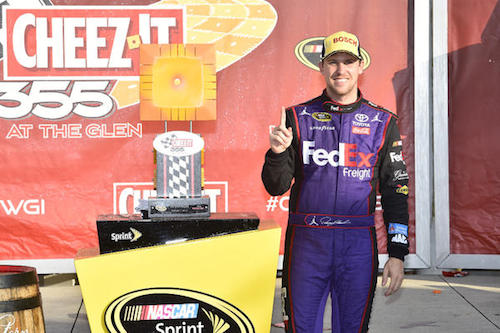 BROADVIEW, Ill. – Denny Hamlin drove his Bosch-equipped No. 11 Toyota Camry to victory lane at the Cheez-It 355 at The Glen on August 7, marking his milestone first career NASCAR Sprint Cup Series road course win. To recognize the occasion, Bosch Giving Track has contributed $1,000 to the Denny Hamlin Foundation. Combined with his back-to-back victories in February at the Sprint Unlimited and the Daytona 500, Hamlin has secured a total of $3,000 in Bosch Giving Track contributions for his foundation this season. Altogether, Joe Gibbs drivers have earned a total of $11,000 in Giving Track contributions for their charities.

Through Giving Track, Bosch pledges $1,000 to a team-specified charity each time one of its sponsored drivers secures a 2016 NASCAR Sprint Cup Series victory. To date in 2016, Bosch has contributed $19,000 to the charities of its sponsored teams.

“Bosch Giving Track provides much-needed support for the causes that are important to the NASCAR community, like the Denny Hamlin Foundation,” said Tony Pauly, director of advertising and brand management for Robert Bosch LLC, Automotive Aftermarket NA. “It was established to help drive real change for these deserving recipients.”

Bosch involvement in motorsports dates back to the early 1900’s, and it has been equipping NASCAR teams with parts and technical advice since 1991. In 2012, when the NASCAR Sprint Cup Series made the move from carbureted engines to more efficient fuel injected engines, Bosch became the sport’s exclusive oxygen sensor supplier. Beginning in 2016, Bosch has expanded its agreement with NASCAR to include fuel injectors and fuel pumps.