BROADVIEW, Ill. – Dale Earnhardt Jr.’s victory at the 56th running of the NASCAR Sprint Cup Series Daytona 500 was indeed a celebration of the Bosch and Hendrick Motorsports partnership, which has now spanned more than a decade. Driving the Bosch-equipped No. 88 Chevrolet SS, “Junior” won the season-opening “Great American Race” at Daytona International Speedway on February 23 – for the second time in his career. His previous win in NASCAR‘s premier event was in 2004 and he finished second in three of his last four attempts at the Daytona 500. 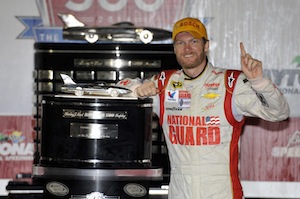 “Bosch congratulates Hendrick Motorsports on a stellar start to the 2014 season. We’re proud to be a part of this winning team and are truly excited to see what the rest of the season brings,” said Tony Pauly, Director of Advertising and Brand Management for Robert Bosch LLC. Earnhardt’s No. 88 Chevy SS is equipped with a variety of Bosch components – spark plugs, alternator, starter, fuel pump, ignition coils, fuel injectors and, like all NASCAR Sprint Cup cars, Bosch Oxygen Sensors. Bosch Oxygen Sensors are an exclusive NASCAR Performance® product and contribute to engine efficiency and performance, while Bosch Spark Plugs are the Official Spark Plug of Hendrick Motorsports.

“The Bosch-Hendrick Motorsports partnership is a perfect match,” said Jeff Andrews, Director of Engine Operations at Hendrick Motorsports. “Racetrack conditions are tough, and the way Bosch focuses on the quality and reliability of its products is perfectly in sync with Hendrick Motorsports’ focus on winning races. We’re proud to work with them both on and off the track.”

According to Pauly, “Our research and development efforts in producing products for motorsports has a major impact on the entire range of Bosch products made for the aftermarket. Bosch brings the same rigor and high standards to the development of its products for its aftermarket customers and ultimately, for the motorist.”