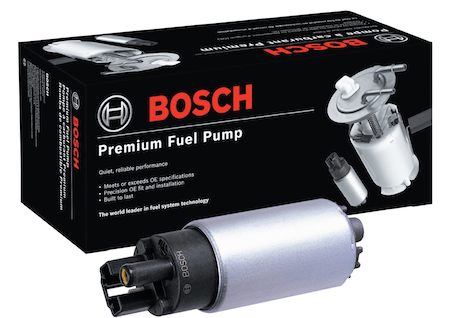 Additions were made to the braking, rotating machines, fuel pumps and throttling devices categories; and a new LED work lamp program was announced.

BROADVIEW, Ill. – Robert Bosch LLC, leading manufacturer and supplier of automotive parts and systems to original equipment manufacturers (OEMs) and the independent aftermarket, has added 27 new aftermarket part numbers to its product portfolio in December. Additions were made to the braking, rotating machines, fuel pumps and throttling devices categories; and a new LED work lamp program was announced.

A total of three new brake pad SKUs were added this month extending coverage for many late-model vehicles. Of these, two new part numbers have been added to the premium QuietCast line extending coverage for Domestic and European vehicles, and one new number has been added to the Bosch Blue line for additional Domestic and Asian vehicle coverage. Hardware kits are included for select applications.

All Bosch premium QuietCast Disc Brake Pads feature friction formulas specific to the application – semi-metallic, NAO or copper-free ceramic – and include synthetic lubricant in each package.

Bosch Blue Brake Pads feature OE-style, multi-layer shims that provide superior noise dampening characteristics. Specially designed to deliver quality and performance to the ‘everyday driver,’ Bosch Blue Brake Pads are ideal for the shop owner who is a “generalist” and is looking to provide customers with the best value. For added protection, Bosch Blue Brake Pads come towel-wrapped for select applications. The material used is similar to the shop towels that technicians use on a daily basis when working on their customers’ vehicles.

The single Bosch Blue part number that is available with a hardware kit fits applications including2005-2012 Ford Escape and 2005-2011 Mazda Tribute, and covers 1.7 million units in operation.

An essential part of the air intake system in a modern gasoline engine, the throttle body assembly – in combination with the electronic throttle control system – regulates the amount of fresh air entering the engine. This unit is an actual OE product which offers plug and play operation with no flash update needed.

Bosch has introduced a new line of LED Work Lamps which includes seven part numbers that cover applications for commercial vehicles, forklifts, farm and construction equipment. Bosch LED Work Lamps have low power consumption and offer a long service life with zero maintenance. Built with high quality materials, these LED Work Lamps can stand up to the toughest weather conditions and have an IP rating of 67. Consult the application guide for specification information.

“We stand firm in our commitment to the business success of our customers – automotive service and sales professionals,” said Thomas Winter, Robert Bosch LLC, vice president, Automotive Aftermarket NA. “To that end, our goal is to provide them with an ever expanding lineup of top notch parts that will help them best serve the needs of their customers.