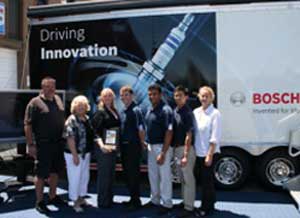 The award was given to the exhibitor whose display showed the most cleanliness, had the greatest consumer appeal and whose staff and display provided the best crowd interaction. The 33rd annual Super Nationals were held May 26-27 at the Lancaster Event Center in Lincoln, Neb. This is the only exhibitor award presented at this annual event.

Bosch’s “Driving Innovation” traveling exhibit is a colorful, fun-filled, attention-grabbing 40-foot trailer carrying the message of Bosch products to hundreds of thousands of motorists at events across the U.S.

• An interactive spark plug kiosk introduces the new Bosch Iridium plug, with graphic demonstrations of the new plug firing, its OE-based technology and construction, and comparisons to competing plugs.

A 55-inch high-definition monitor on the outside of the road tour display continually plays motorsports images, videos of ICON blades and The Discovery Channel’s “Storm Chasers” studying tornadoes, drifting champion Vaughn Gittin in action — all meant to draw visitors in to enjoy the show. Inside, motorsports videos and images, including dramatic scenes featuring Gittin, reflect the images presented outside and immerse the visitor in the latest in Bosch automotive products.

“The ‘Driving Innovation’ road tour gives auto enthusiasts and everyday motorists a close look at the exciting products offered by Bosch, as well as promoting our involvement in the automotive aftermarket and motorsports,” said Pam Krebs, director of advertising and sales promotion for Bosch.