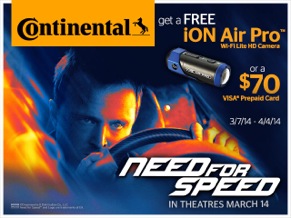 FORT MILL, S.C. – Fans can capture their need for speed as Continental Tire’s newest promotion celebrates the release of DreamWorks Studios’ "Need For Speed," which hits theaters March 14. Now through April 4, consumers who purchase four Continental Tire passenger or light truck tires for a total of $499 or more will receive an iON Air Pro WiFi Lite-Camera or a $70 VISA gift card.

Consumers can purchase the same Continental tires featured throughout the "Need For Speed" movie. From performance to touring tires, Continental Tire outfitted some of the world’s most exotic, and talked-about, vehicles with its line of passenger and light truck tires. As seen earlier this year in Continental’s SEMA display, the ExtremeContact DW tire from Continental’s line of ultra-high performance (UHP) tires outfits the Torino driven by Aaron Paul’s character, Toby Marshall. The ExtremeContact line is also represented on Koenigsegg’s, Bugatti’s, Saleen S7’s, Spano’s and McLaren’s throughout the movie.

Visit your local Continental Tire dealer for more information on the “Capture Your Need For Speed” promotion. For a dealer near you, visit www.continentaltire.com. Fans can join in the conversation on Twitter (@continentaltire) at #NeedForSpeed.

Capture Your Need For Speed With Continental Tire