This year, Centric Parts received the award for “New Assignments & Applications in 2013,” acknowledging the company’s ongoing status as the single-largest contributor to identifying new applications for the FMSI system. 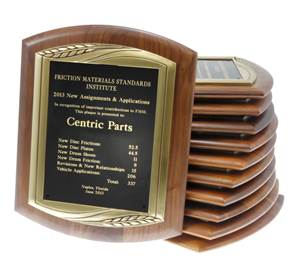 INDUSTRY, Calif. – Centric Parts, a leading North American manufacturer and supplier of aftermarket brake components and systems for import and domestic vehicles, announced that it has once again been awarded a Friction Materials Standards Institute (FMSI) Award for contributions to the automotive industry. This is the 11th consecutive year Centric Parts been honored by FMSI, dating back to the award’s inception in 2003.

This year, Centric Parts received the award for "New Assignments & Applications in 2013," acknowledging the company’s ongoing status as the single-largest contributor to identifying new applications for the FMSI system.

This year’s award was presented to Mario Figueroa on behalf of Centric Parts. Figueroa leads a group of researchers, engineers and technicians at Centric that is responsible for gathering and examining new model year vehicle components to identify carry-over parts and to catalog new ones to be entered into the FMSI registry. This year alone, the Centric Parts team was responsible for adding nearly 200 new numbers to the FMSI database.

“We are extremely grateful for this honor,” said Dan Lelchuk, president of Centric Parts. “This is the 11th time our contribution has been recognized, a further testament to the commitment, focus and hard work of our whole Centric Parts research and development team. We are pleased to be working in concert with FMSI and, in turn, working to support our industry. So much of our time and effort goes into research to help Centric remain the first and the best, and this recognition by FMSI is a further validation of our work.”

The Friction Materials Standards Institute, the organization behind the FMSI Award, was founded in 1948 to maintain a standardized part numbering system used by the automotive aftermarket friction industry, and to disseminate to its members scientific, engineering, technological, statistical and other relevant information. The FMSI Award program was started 10 years ago to recognize companies that excel in actively contributing information and research to support the system.