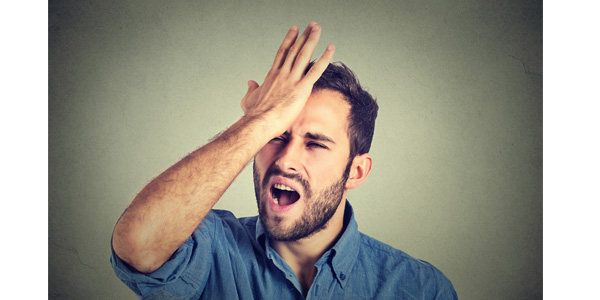 It’s not ALWAYS the customer who gets it wrong, or doesn’t know what he wants.

Back in April, I shared a few stories at the expense of some colorful and offbeat customers. This month, we’re turning the tables for a lighthearted look at our own side of the counter. It’s not ALWAYS the customer who gets it wrong, or doesn’t know what he wants. If you haven’t made a mistake or three behind the counter, you’re probably not trying hard enough.

We live in an electronic age, and most of our day is spent staring into a monitor, interpreting the information presented to us. To keep it simple, e-catalogs give us “helpful” prompts to follow. Unfortunately, we can all sometimes fall into the habit of blindly reading along, and asking the questions before we actually think about what we are asking. I’ve heard customers complain that the person in front of them at the counter “only knows as much as he can read off the screen,” and one afternoon, boy did I prove that one!

My customer dropped by, and told me he needed a clutch kit for his truck, so I began my data entry – year, make, model, engine – and then the prompts began.

I knew better, I honestly did. I had sold dozens of clutch kits, even installed a few myself. But that day, I just wasn’t focused on the job at hand. I turned as red as my uniform, and quickly apologized. He wasn’t nearly as upset about it as I was. In fact, he was laughing as hard as my co-workers who overheard the whole thing. But I sure heard about it from him for a good long while after that!

You Snooze, You Lose

A pet peeve of mine is when I call another store with a part number, and the counter pro insists on knowing the application to look it up. I had found a grease-seal number by dimension, and did not have one in stock. I called across town, and asked the employee to check their stock. They wanted to know the application. I gave them the information, but that seal wasn’t listed in their catalog. I asked again for them to check the number, or interchange it in their system. He told me he could only look it up by application.

“So,” I asked, “if I buy a bottle of brake fluid, do you have to look up the car to find the part number?”

“Well, no, I just type in the number on the bottle.”

“OK, great. Would you please type in the number I just gave you?”

“Oh, OK,” he said. I heard what seemed like a lot of typing, and then, “Yeah, we have THAT number here, but it doesn’t fit your car!”

I told my then-wife the story that night. Apparently, she never forgot it. Wives have a way of doing that.

We had owned a farm, and my store supplied the farm’s filters and other parts, even after our marriage dissolved. I knew all of the equipment, and could tell what she was working on just by the list of filter numbers she presented me. But one day, there was a new part number in the mix. I held up a box-top, and said, “Hey, what’s this fit?” Her dead-serious reply was “Why? I gave you the part number.”

Yes, my brain has been caught napping on occasion, but one guy I worked with (briefly) really WAS caught napping … dead asleep at his call-center station. When he woke up, there was a Post-it note stuck to his phone that read, “You have a job here until you read this message.”

He moved out of state shortly after his dismissal, but having spent some time in our call center, he knew the 800 number to our store. I took a call one day, and it was Dave, in Texas, asking me for the part number to a product that he was trying to find at his new job!

Employees come and go at every parts store, especially delivery drivers. One of our “short-term” hires went on delivery with a battery. He arrived during the shop’s lunch break, and searched for someone to sign the invoice. He eventually found someone to accept the delivery. Unfortunately, it was a person in the waiting area, who owned the vehicle the battery was intended for. They weren’t exactly pleased when they discovered the difference between “wholesale” and “retail” price schedules.

Good parts specialists are known to go above and beyond for our customers, but I had a rookie delivery driver who went a little too far – literally.

We had an internet order come through from a customer at the very edge of our territory, a rural shop that was difficult to get to. We agreed to deliver it the following day, using a driver familiar with that area. Soon after, someone noticed that the order was gone, and that our newest driver was also missing. We tried his cell, which went straight to voicemail, and left a message. He called us when he got back in range, and the manager asked where he was. He replied very matter-of-factly that he was two towns over delivering parts to our rural customer.

“How did you wind up out THERE?” our manager demanded. The driver’s answer was as simple as it was profound: “I put the address in my GPS.”

We all have those Homer Simpson “D’oh!” moments occasionally, and not all of our “creative solutions” translate well in real life. It’s easy to laugh about our foul-ups, and even easier to laugh at those of others. But when it comes right down to it, don’t we all deserve an “F” for effort sometimes?

Advertisement
In this article:Customer Relations