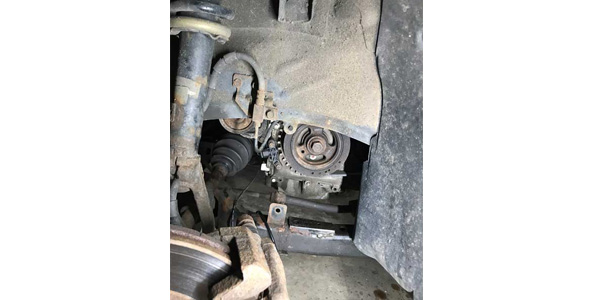 Crank position sensors are an electronic device used to monitor the position and speed of the crankshaft.

In the old analog days, a technician (who was called a mechanic back then) would line up the distributor to the No.1 cylinder and make sure the crank was aligned to the TDC (top dead center) mark. Then, he would fire up the engine, pointing a timing gun at the crank pulley and the engine block. The “mechanic” rotated the distributor until the marks on the pulley and block were in the right place, and voilà, the engine was timed!

In today’s distributor-less, electronically controlled engines, the above scenario is no longer necessary. Engines are timed with a series of sensors and electronic signals traveling through the wiring harness to the PCM or ignition module, which then tells the ignition coils when to fire. Without these sensors working correctly, there’s little chance the engine will run, let alone fire up at all.

What’s aggravating to technicians when these sensors act up is trying to get to the root of the problem.

Crank position sensors (CKP) are an electronic device used to monitor the position and speed of the crankshaft. The information obtained by the crank sensor helps the PCM control the fuel injection and ignition timing, such as with variable valve timing and other engine parameters set by the manufacturer.

Sometimes, it’s easier (and less expensive) to replace the CKP than it is to spend hours trying to recreate the problem on a scan tool. It’s not always apparent where the problem lies, as it could be in the wiring harness from a loose, chaffed or corroded wire, or in the ignition control module or PCM. And if you don’t want to take a wild guess, then some basic understanding of how the crank sensor works can go a long way toward solving the issue.

Role of the CKP

The crank position sensor indicates when a piston reaches TDC. The PCM calculates the position of the crankshaft in relation to TDC to signal when to time the spark. The CKP also detects cylinder misfires on OBD II engines (after 1996) by measuring tiny variations in crank speed.

If the parameters aren’t met, the PCM triggers an engine code such as a P0016, which is a crank and cam sensor correlation code. This means that the marks on the top of the engine at the camshaft aren’t in sequence with the crank. It may not be a bad CKP or CMP, although it may be just that. It also could be a stretched timing chain, or that the engine has skipped a tooth or was statically timed improperly. This may be from removing the cylinder head or replacing the
timing chain and either the cam(s) or the crank were not aligned.

Technicians can detect if the timing chain is stretched or misaligned with a scope to capture the waveform. This procedure also can help technicians diagnose circuit and sensor problems quickly without the need to remove the valve cover or timing cover to look at the chain or belt. Analyzing the waveform may reveal a damaged tone ring and it can show the engine timing if measured from multiple sensors.

Hall effect CKPs must be aligned with the tone ring to generate a clean signal. Any interference may cause idling issues or damage the sensor. Magnetic CKPs must be installed with just the right amount of air gap. This is generally within .05 inches of the reluctor wheel. Whether a crankshaft position sensor is the magnetic or a Hall effect type, an intermittent or low voltage to the sensor can result in a loss of the timing signal and a cranky engine that won’t start.

Crankshaft Position Sensors: Getting to the Root of the Problem