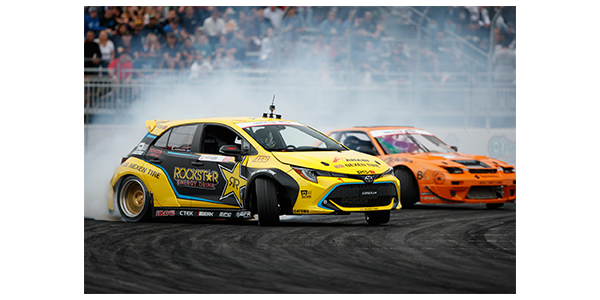 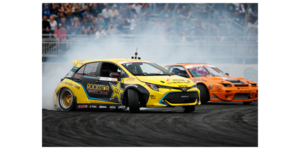 CTEK, Inc. is again sponsoring Fredric Aasbo in the 2018 Formula Drift Series. The Norwegian driver has the most wins of any driver in the series to date with 11 event wins. Aasbo was the 2015 Formula Drift World Champion and finished the 2017 season second in the points.

Aasbo started off the season with a spectacular victory driving his Papadakis Racing Rockstar Energy Drink / Nexen Tire Toyota Corolla Hatchback in the season opener in Long Beach, one of the most challenging stops on the Formula Drift schedule.

“We are excited to renew our commitment to Fredric Aasbo in the Formula Drift series,” said Bobbie DuMelle, Executive Vice President of CTEK. “Besides being a fellow Scandinavian, Fredric shares our core values of commitment, quality and a determination to win!”

“I’m thrilled to have CTEK back on board this season,” said Aasbo. “I’ve come to rely on CTEK chargers as I travel from race to race – both on and off track. In addition to competing at events across the world, I practice in a lot of different vehicles in the offseason and I often find myself in need of charging batteries. With CTEK it truly is a case of ‘set it and forget it’ – I just hook up the charger and know that the batteries will be taken care of in the best way possible.

CTEK, which is headquartered in Sweden, has developed Smarter Battery Chargers that monitor battery health and respond by delivering the appropriate level of charge without damaging the battery or the vehicle’s sensitive electronics. CTEK chargers ensure that a vehicle is ready to go, delivering peak performance in all conditions. Careful battery conditioning and charging is shown to extend battery life by up to three times, providing peace of mind for cars that are used every day or parked for extended periods.

The 2018 Formula Drift Pro events Aasbo will compete in:

Drifting is a high-skill, high-powered motorsport with an emphasis on car control. In the Formula Drift series, drivers compete in knockout heats on a closed course, sliding sideways in trials judged on speed and style. With origins in Japan, it is one of the fastest growing forms of motorsport in the world.

ABOUT FREDRIC AASBO
Driver Fredric Aasbo has achieved more than 100 wins and podium finishes on three continents over the past decade of competition. He is the defending Formula DRIFT World Champion and Formula DRIFT Pro Champion this year. A two-time Nordic Drifting champion (2007, 2008), Aasbo made his North American debut at a global drifting invitational in 2008, and turned heads when he won the 2010 Formula DRIFT Rookie of the Year title. Coming originally from Ski in Norway, Aasbo now splits his time between Southern California and his native country.

ABOUT CTEK
• CTEK is a leading global brand in the care and maintenance of vehicle batteries.

• CTEK is a world leading authority on battery technology, battery chargers and battery care and has built a reputation for being first to market with new products.

• CTEK chargers use patented technology to ensure that chargers condition, charge, and maintain all types of lead-acid and lithium (LiFePO4) batteries quickly, simply and safely.