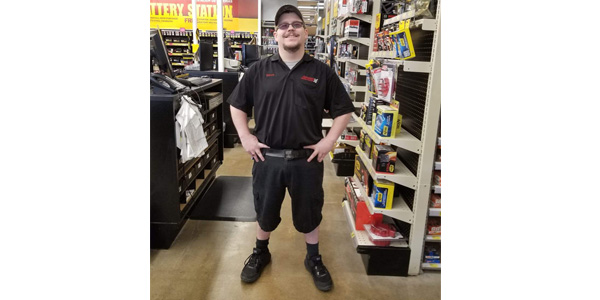 Kolenski credits his father for sparking his interest in the automotive aftermarket.

Without the automotive aftermarket, Dave Kolenski Jr. might not be where he is today. In fact, he might not exist at all.

If that seems like an exaggeration, keep in mind that Kolenski’s parents met at a NAPA Auto Parts store in Southeastern Pennsylvania (his dad worked the counter, while his mom helped out with the accounting). So, Kolenski is quick to point out, “Auto parts have been a part of my life since the very beginning.”

Kolenski considers that a blessing. Since joining Advance Auto Parts in December 2012, his career has flourished. Shortly after he started as a part-time driver at Advance store No. 7269 in New Holland, Pennsylvania, the store promoted him to a full-time driver, and then enlisted him to help behind the counter. In 2014, the store’s commercial parts pro relocated to another state, creating another opportunity for Kolenski, who jumped in and has been in that role ever since.

“When I hired Dave, I could tell right away he had a passion for people,” says Barry Shumaker, who was the general manager at the New Holland store before moving to Advance store No. 7950 in nearby Leola. “And growing up working on vehicles when he was young, he also had the passion for anything automotive, and he had the knowledge. Once he had an opportunity to move into the commercial parts pro position, he just took off with it.”

Kolenski credits his father, Dave Kolenski Sr., for sparking his interest in the automotive aftermarket. In addition to working the counter at several local parts stores, his father was a mechanic for a while, and “he was always doing something with an engine.”

“Without him, I don’t know if I’d be doing this and I’d have the passion for it,” Kolenski says of his dad, who passed away earlier this year.

When Kolenski joined Advance at the age of 21, the store paired him with Joe Marino, who then was the commercial parts pro. Marino took the 21-year-old under his wing, and the two hit it off. “I have to give a lot of credit to my success at Advance to Joe, because he really showed me the ropes,” Kolenski says.

Since becoming the commercial parts pro, Kolenski’s customers have played a big role in his education too.

“My garages have taught me probably 75 percent of what I know, and I’m very grateful for their knowledge,” he says. “Every time I talk to these guys, I learn something new.”

Kolenski has visited some of his shops to observe how they operate, “and just to get a feel for what a day in the life of a shop owner or tech is like,” he says.

For more of a hands-on experience, he took his 2001 Chevy Blazer to a shop, after hours, to replace two hub bearings. The shop owner replaced one hub bearing while Kolenski watched, and then the owner guided Kolenski through the process of replacing the other one. “He said, ‘Alright, here are the tools you need. I’m gonna take a step back and I’d like to see you do it.’ That was a really cool experience.”

Roughly 60 miles west of Philadelphia, New Holland is a rural community (technically it’s a “borough”) in the heart of Pennsylvania Dutch Country. Given the demographics of the area, Kolenski doesn’t have any national accounts.

Time is money for any repair shop, but it’s even more critical to the small, one-lift shops that are the bread and butter of Kolenski’s business. That’s top of mind for Kolenski every time he gets a call from a customer.

“If someone calls me for front brake pads – let’s say for an ‘09 Altima – you can make that a 30-second phone call as opposed to a three-minute phone call. I like to make the call as fast as possible for them, because I know they don’t have time to be hanging out on the phone. The more efficient I can make their bays, the better off we all are in the whole business relationship.”

Not surprisingly, Kolenski has built some strong relationships with local shops over the past few years, and has grown the store’s commercial business, according to Shumaker.

“Dave is the type of individual who will not stop until he gets the right part for a customer,” Shumaker says. “Even if it takes him all day, he will track down the part.”

And even if it’s a part for a Kia Rondo. Recently, when one of his shops called in search of a muffler assembly for the now-discontinued Rondo (Kia stopped producing the minivan/crossover after 2010), Kolenski sprang into action. The customer – an out-of-town family heading home from a vacation – needed to get back on the road quickly, so time was of the essence.

Other parts stores in the area had told the shop the muffler assembly was a special order, and it would be a week before the unit arrived. Kolenski called those stores “just to make sure they weren’t giving [the shop] the run-around.” Although he was willing to source the muffler assembly from a competitor if necessary, Kolenski found one in stock at a nearby Autopart International store. He sent a driver to get the part, and the shop was able to get the customer back on the road “without getting nauseous from exhaust fumes.”

“At Advance, we have many different avenues to find something within our company,” Kolenski says. “We have WorldPac, we have Carquest, we have Autopart International – we have a lot of different realms to look into. There’s bound to be a sister store that has the part.”

Still, Kolenski won’t hesitate to look outside the Advance universe if it means delighting a customer.

“I remember a garage was very, very thirsty for a particular kind of tea, and wouldn’t you know it I went to Dollar General next to my store and I second-sourced that shop a gallon of tea and marked it up and they didn’t care. They were just thirsty.

“Whenever an account calls me, I will never say ‘no.’ I will find a way to get them whatever they’re asking for, no matter what.”

One of Kolenski’s proudest moments at Advance came last September, and it wasn’t behind the counter. Kolenski organized a car show that raised nearly $1,000 for JDRF, the Juvenile Diabetes Research Foundation. The show squeezed more than 30 cars and 15 motorcycles into the store parking lot. For the charity raffle, Kolenski was able to get his hands on several pictures autographed by Brittany Force, driver of the Advance-sponsored Top Fuel dragster.

It was an emotional day for Kolenski, whose grandfather passed away in 2017 due to complications from diabetes.

“That was an amazing outreach by the community,” he says. “We got shops to donate door prizes. In fact, one of our woodworking shops that buys from us made wooden plaques for the winners of the car show. We had a DJ show up completely free. Shops gave away free state inspections and free oil changes.”

Kolenski is grateful to all the volunteers who made the event a success, as well as his superiors at Advance, who supported the idea and gave him the green light to make it happen. He says he plans to organize another car show for JDRF this September.

Dave Kolenski Jr. Making the Most of His Opportunities at Advance Auto Parts