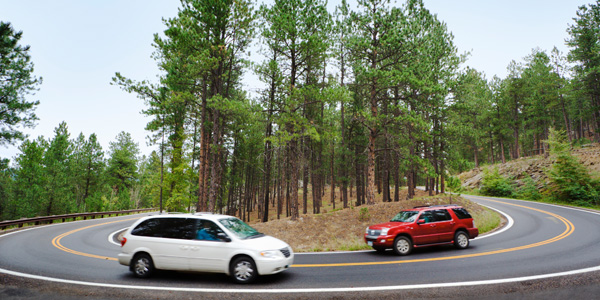 While fully autonomous vehicles are still quite far from being road-worthy, systems that control how vehicles ride and react in panic situations are here today.

Most drivers think they can handle all driving situations and have great car control. But, unless your last name is Earnhardt or Andretti, let’s face it: There’s a greater chance a computer will out-drive you in a head-to-head test.

While fully autonomous vehicles are still quite far from being road-worthy, systems that control how vehicles ride and react in panic situations are here today. Many vehicle owners don’t even know what electronic stability control (ESC) means except when it kicks in and saves them from sliding or skidding out of a turn.

The correlation between a vehicle’s suspension and the condition of the components such as shocks, struts, springs, ball joints and steering parts all come into play and affect how well the electronic systems work in situations when a driver needs them most.

The maximum speed in which a vehicle can corner and also brake is controlled by physics: The four contact patches on the tires that interact with the road and give feedback to the driver are limited by the inertia and direction of the vehicle.

Many of the advances in ESC and rollover stability control (RSC) are possible due to the use of a yaw-rate sensor. The sensor is sometimes referred to as a roll-rate sensor, and by definition, it measures a vehicle’s angular velocity about its vertical axis in degrees per second to determine the dynamic positioning of the vehicle as it drives through corners or approaches a potential rollover condition.

The yaw-rate sensor, combined with steering-angle and wheel-speed sensors, reports data to the computer module via the high-speed CAN bus network, and the module calculates when to apply brakes, or when not to, and also might cut the throttle angle to enable the vehicle to travel safely in the direction the driver intended.

Essentially, the ESC system is an advanced form of traction control. It works in the background without the driver knowing it’s there until it engages. Since 2012, ESC has been required on vehicles sold in the United States, and today these systems are getting faster at making corrections and re-calculations of those corrections, if necessary.

Even with all of the electronics monitoring body roll, wheel speeds and braking, the computer only can work within the dynamics of the vehicle. As tires, brakes and suspension components begin to wear, corrections take longer and more of them are necessary to keep the vehicle under control.

Shocks and struts wear over time and aren’t always noticeable to the vehicle owner, but the computer knows when there’s just a little more wallow in the corners and wheel bounce over bumpy roads. Braking also can be affected by worn suspension parts and will result in longer stopping distances as well as quicker ABS engagement under hard braking.

One thing ESC doesn’t do is add performance. It’s a safety system that works with other systems to bring the vehicle under control. It won’t make you drive like Richard Petty, but it may save your life or your customer’s life. One way to ensure the system works optimally is to be sure the brakes, tires and suspension are up to the job.

Advertisement
In this article:Suspension Components, Technical