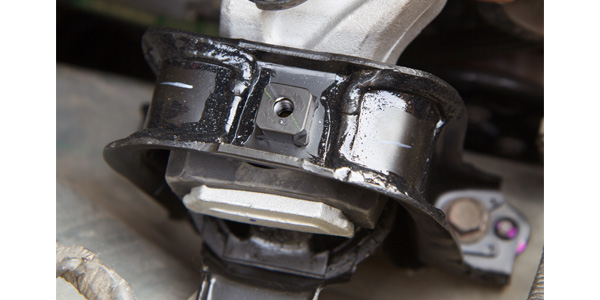 Engine and transmission mounts are among the most inconspicuous components on a vehicle, hidden away underneath the car, doing their job without any fanfare. But what most people fail to realize is how important these mounts are in reducing noise and vibration inside the cabin, and keeping things running smoothly.

Most late-model vehicles connect the engine and transmission to the chassis with three or four mounts, depending on the layout of the engine. Most mounts are made out of a rubber material so there’s no direct metal-to-metal contact between the engine and the vehicle’s body or frame.

When an engine or transmission mount fails, the result usually is harsh vibration from the movement between the body and drivetrain. When a mount fails, the rubber inside typically either has broken or deteriorated enough that it no longer will dampen movement, creating violent shakes or shutters.

Some common symptoms associated with worn engine mounts include impact noises coming from the engine bay. Worn, damaged or broken mounts can create clunks and other unusual sounds as a result of the weight of the engine shifting to the point of contact.

Excessive engine movement also can increase the chances of radiator or heater hose breaking and even could cause the throttle linkage to stick (if there’s a cable). If the transmission mount is broken, it can create driveline noise when starting or accelerating, and it might even affect the operation of the clutch or other linkage.

The rubber material is molded into the mount, so there’s no direct metal-to-metal contact between the engine or body. To further dampen the vibration, some engine mounts are filled with liquid. A liquid-filled engine mount functions similar to a shock absorber.

Motor/transmission mounts are not easily accessible, and generally they require supporting the engine to replace one. Most of the cost to replace a motor mount is for labor if repaired by a shop. Some vehicles use fewer mounts that are in harder-to-reach areas (i.e. minivans), so the labor cost increases due to the difficulty of replacing them.

On high-mileage vehicles, it’s typical to find one or more broken or collapsed mounts because the rubber deteriorates with age. If one mount has failed due to age and deterioration, there likely are others that will fail soon, so it’s best to replace them all.

Upper engine mounts prevent the engine from rocking back and forth as the vehicle accelerates and decelerates. There’s usually a bushing on each end, with one bushing attached to the engine and the other to the radiator cross-member support.

Applications that use liquid-filled mounts are more expensive than solid rubber ones and can collapse or leak. Solid rubber mounts are available as a low-price alternative for some applications, but they may not perform as well as the original-style mounts.

Some late-model cars have electronically controlled mounts that can adjust the stiffness of the mount and cancel out harmonics at specific engine speeds. These can use a vacuum actuator to change the stiffness of the mount, and some generate a “counter shake” to offset engine vibrations. If your customer is replacing an engine, transmission or clutch, be sure to remind them to inspect all of the mounts and replace any that are damaged.