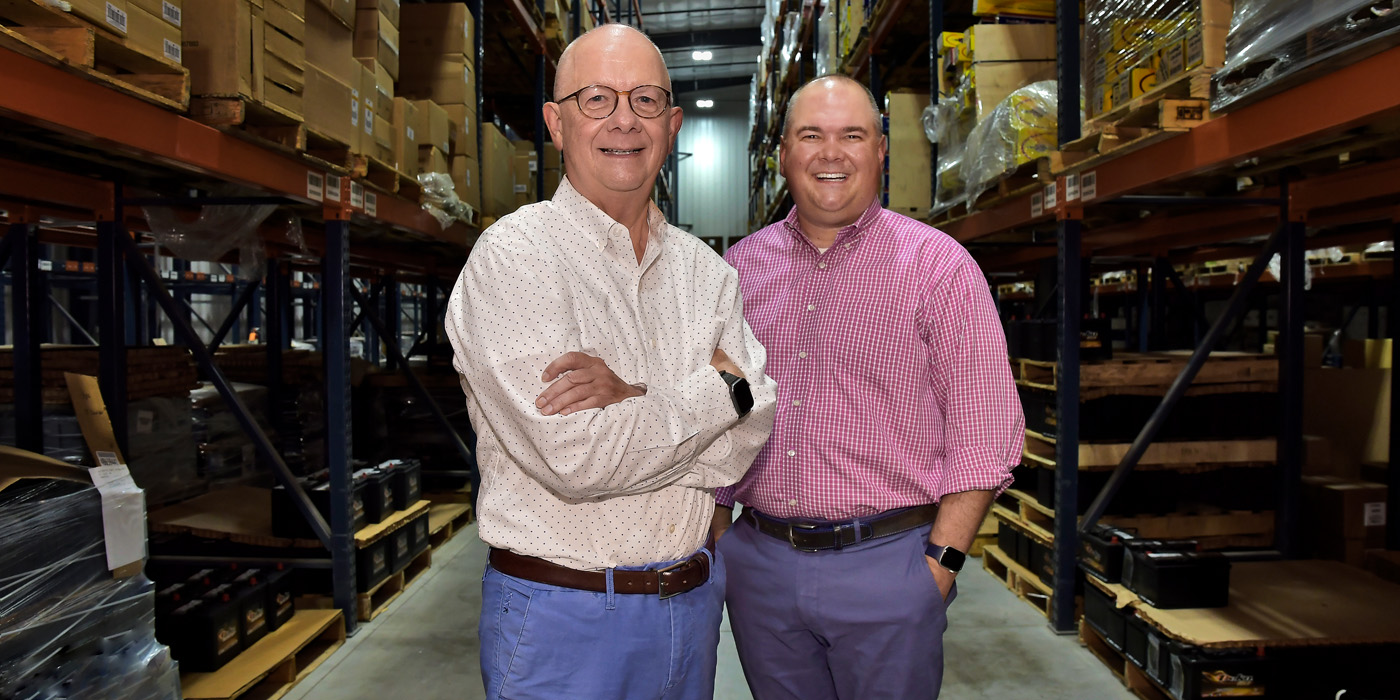 Three generations of Bartlett leadership have shaped the past, present and future of APH.

Corey Bartlett, president and CEO of Automotive Parts Headquarters (APH), is in a unique position to reflect on the company’s 100th anniversary. Born into an aftermarket family, Corey has been immersed in APH since he was a kid, and he treasures the childhood memories of tagging along with his dad, John Bartlett, for inventory counts and jobber changeovers when John was running the company. Corey always knew he’d eventually come to work for the family business, and he did so in 2000, after earning a bachelor’s degree in history and geography from Gustavus Adolphus College in St. Peter, Minnesota.

“I do enjoy the history piece,” Corey says. “And because our family has been doing this for a long time, it’s an interesting mix where old work photos are also family photos.”

As he contemplates APH’s centennial, Corey adds: “We’ve worked hard to help everybody understand where we’ve been and the hundreds of aftermarket professionals who came before us. And so hopefully we can learn from where we’ve been, and continue to improve upon what we’ve been doing.”

St. Cloud, Minnesota-based APH, and John and Corey Bartlett, are familiar names to many in the automotive aftermarket, thanks, in large part, to the Bartletts’ longtime involvement in the Aftermarket Auto Parts Alliance – APH has flown the Auto Value flag since 1986 – and their steadfast support of the major industry associations. But if you were around in the Roaring Twenties, you would’ve known APH by a different name – National Bushing & Parts Co. – and the family that molded the company into what it is today wasn’t in the picture just yet.

In 1920, Ray Riley and Aime Pouliot formed National Bushing in Minneapolis. The nascent company manufactured bronze bushings and distributed other replacement parts in support of a burgeoning repair trade for Pierce-Arrow, Packard, Ford and other nameplates – in addition to carrying spare parts for trucks, busses and tractors. The company’s early inventory included Bosch magnetos, Essex hubcaps and Sterling starter grinds.

While National Bushing was doing a brisk business selling replacement parts, where the company really shined was machining. The cars of the early 20th century were infinitely less complicated than the computer-controlled conveyances of today, and a skilled machinist back then could remedy many ailments in a jiffy. Leveraging its reputation as one of the top machine shops in the Upper Midwest, National Bushing opened its first store in 1922, on the outskirts of downtown Minneapolis. In 1925, Riley and Pouliot opened a second store, in St. Paul.

Riley and Pouliot sold the bushing-manufacturing segment to Diamond Motor Parts Co. in 1926, which helped bankroll the addition of more stores. While the Great Depression that came a few years later put their expansion plans on pause for a bit, they opened more stores in the mid-1930s, giving them a formidable presence in the Twin Cities region.

The next chapter of the story came in 1938, when Jack Bartlett – Corey’s grandfather and John’s father – joined National Bushing as a janitor at the St. Cloud store. John remembers his father as “an exceptionally hard worker” who had a lot of ambition. Still finishing high school, Jack quickly moved to the machine shop, and continued to work his way up the ranks until he was promoted to store manager. As time went on, the founders of the company began selling their stores, and they believed that the store managers and employees should get the first crack at buying them. In 1959, Jack became a financial partner in the St. Cloud store and several other locations.

“He borrowed money from some of his friends, and a little bit from the bank, and went out on a limb,” John says of his dad. “And he did well.”

Under Jack’s leadership, the ownership team relocated the St. Cloud store to a modern, 25,000-square-foot building in 1960, and steadily opened more stores. In 1965, Jack and his four partners established Automotive Parts Headquarters Inc. As he guided the company to greater heights in the coming years, one of his mantras was based on the Golden Rule: “You must treat others – whether it be a customer, fellow employee or a supplier – as you would like to be treated.”

Like Corey, John Bartlett got an early start on his initiation into the world of parts distribution. By the time he was in eighth or ninth grade, John was sweeping floors and unloading freight – and eventually helping out on the counter – at the St. Cloud store every summer. He holds especially fond memories of making parts deliveries.

John joined APH on a full-time basis in 1971, after completing a bachelor’s degree in business and economics at Bemidji State University. At that time, the company’s footprint had expanded to 15 locations. The following year, APH opened a 50,000-square-foot warehouse in St. Cloud, to support the company’s continued growth.

In December 1976, the APH story took an unexpected turn with the sudden passing of Jack Bartlett. As John describes it, Jack’s death was “a complete shock to the system” – to his family members and colleagues. Although the ownership stake in APH was split evenly among Jack and his four partners, Jack, unquestionably, was the heart and soul of the company.

Soft-spoken and much more comfortable working “behind the scenes,” John found himself thrust into the position of president – practically overnight – in his late 20s. He admits the next few years were stressful. Growth plans were paused, temporarily, as John focused on stabilizing the company and developing his own skillset. He also set out to revamp the ownership structure and consolidate operations. While those years were challenging, they were critically important ones, as they set the stage for the next phase of the company’s growth.

A prevailing theme for APH has been steady growth through acquisition, which has enabled the company to expand its footprint from its base in Minnesota to Wisconsin, North Dakota, South Dakota, Michigan and Montana. From 1988 to 2008, APH grew its store count from 17 to 71, taking annual sales from $21.3 million to $70.8 million.

The list of acquisitions through the years – from OK Auto Parts in 1998 to Hedahls in 2017 – is too long to cover exhaustively here. But the common thread has been APH’s careful approach to cultivating and integrating each one, which maximizes the chances of a successful marriage.

“It’s very different, I think, than in other businesses, where acquisitions are basically about taking over a company. That isn’t how we look at it,” explains Dennis Gregory, executive chairman of APH. “We develop close, personal relationships with people whom we think we could ultimately partner with. And then we welcome their company and their team members to our family.”

Corey Bartlett joined the company in 2000 – coincidentally, the same year the Aftermarket Auto Parts Alliance was formed – and quickly was in the thick of the day-to-day operations. There was some urgency to Corey’s apprenticeship, as John wanted to make sure Corey had the benefit of a proper transition if – God forbid – he was thrust into a leadership role on short notice, like John was in 1976. Fortunately, that wasn’t the case. In January 2008, Corey took over as president, and in 2016, he added the CEO title.

Corey emphasizes that he’s grateful for the transition process that John orchestrated, which included the hiring of Dennis Gregory as COO and CFO in 2008. Corey and Dennis “hit it off from Day 1,” according to John, and they’ve shepherded the company through a period of exponential growth. From 2008 to 2018, the store count went from 71 to 125, and sales nearly doubled. Today, APH boasts 130 corporate stores and more than 30 independently owned stores – all of which fly the Auto Value flag – and employs approximately 1,200 people.

“In comparison to some other transitions that I’ve seen, I’m thankful that he was as helpful and supportive and willing to transition,” Corey says of his dad.

As much as APH has grown, it has faithfully hewed to its roots. Small and midsize markets are, and always have been, in its wheelhouse. Paint & body, which comprises some 15% of its business, is a segment that dates back to the early years, and several dozen stores still have machine shops. APH still supports a number of ag categories, as well as tools & equipment, another long-standing category. In some markets, APH still uses the National Bushing name, in conjunction with Auto Value.

“Each store, each community is a little bit different,” Corey says. “And so we tailor that store, that offering to what’s going on in that market. Although it says ‘auto parts’ on the side of the building, it’s a much more diverse business than a lot of other auto parts distributors. In large part, I think that’s a product of the markets that we serve. In a smaller town, we have to figure out how to sell as much stuff as we can to as many people as we can, so we end up with a broader offering.”

And once they find a home at APH, they tend to stay.

“Our retention rate is very high,” Pascale says. “ … The expertise that installers and highly qualified do-it-yourselfers look for is what you find in our locations. It’s a high level of service, a high level of knowledge and it’s the ability to serve the customer beyond what the point-of-sale system and online catalog can tell you. And that absolutely is a real competitive advantage for us.”

The commitment to service goes beyond the parts counter. On any given day in a normal summer, you’ll find one of APH’s events trailers setting up shop in one of its markets, grilling hot dogs and hamburgers for the local installers. In the smaller communities where APH does business, “word gets around and we pretty much feed the community,” Pascale adds. On especially hot summer days, APH delivery drivers bring ice-cold bottled water and even ice-cream treats to its professional customers.

“With people, we think the little things are the big things,” Pascale says. “Those little extra touches make a big difference, and it gives you an opportunity to have a conversation that’s sometimes a little bit different than just talking about work.”

Supporting the communities where APH does business is one of its core values. APH’s charitable endeavors include its ongoing support of WACOSA, a nonprofit day program for adults with disabilities in Central Minnesota. Last year, APH raised $257,000 for the organization.

In June 2010, after a tornado swept through Wadena, Minnesota, Corey remembers getting a call from Wayne Brasel, a local store manager. Brasel, who was Counterman’s 2015 Counter Professional of the Year, told Corey: “There are a lot of people here that don’t have food to eat, and we need to start making hot dogs.”

“The next day I got a photo of the Auto Value events trailer with Wayne behind it, next to the Red Cross, cooking as many hot dogs as he could to feed the volunteers and whoever needs a hot dog,” Corey recalls. “We can talk about how we as a company contribute X number of dollars to Cause A, B or C. But it’s pretty cool when you see one of our team members connecting the dots and wanting to do good for their community.”

As APH positions itself for its next century in business, the company has created a new leadership structure, which includes Dennis Gregory as executive chairman, Jesse Westrup joining APH as COO and John Bartlett continuing his more than 50 years of leadership at APH in the newly created role of chairman emeritus. In his new role, John will nurture key customer and supplier relationships, explore new growth opportunities and mentor company leaders.

“John led APH to become an industry leader with a strong commitment to its customers, employees and suppliers,” Corey said in July, when the announcement was made. “We look forward to drawing on his experience and wisdom for many years to come. The opportunities ahead of us are very exciting, and I look forward to working with our entire leadership team to prepare for our next 100 years!”