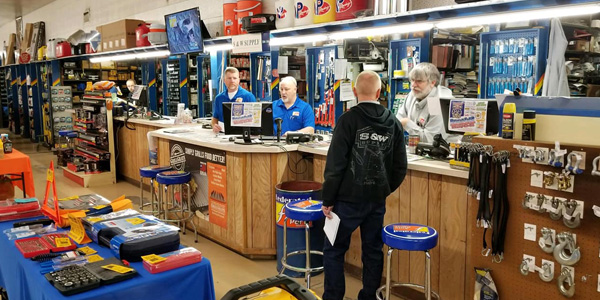 From contests to special events to customer-appreciation days, S&W Supply is pulling out all the stops to thank its customers for 85 great years.

To recognize its 85th anniversary, S&W Supply in Hays, Kansas, didn’t think one event would suffice. So, the longtime Federated Auto Parts member will commemorate its anniversary with a yearlong celebration.

From contests to special events to customer-appreciation days, S&W Supply is pulling out all the stops to thank its customers for 85 great years.

“We are truly blessed to be celebrating our 85th anniversary,” said Don Bickle Jr. and Tim Bickle, co-owners of S&W Supply. “We have tremendous customers and we want to show our appreciation for their continued support throughout the years. We are very fortunate to have so many wonderful employees, both past and present, who helped make S&W Supply the company it is today. To think this company started with one small auto parts store, and here we are 85 years later, is quite remarkable.”

The celebration for S&W Supply kicked off earlier this year with commemorative customer-appreciation days, highlighted by lunch events at all of its locations. In addition, the company is conducting in-store anniversary specials that will change on a monthly basis.

All S&W customers will have the opportunity to participate in a special scratch-card promotion for a chance to win prizes such as tools, televisions and gift cards. Prizes will be awarded to customers at every location, and there will be a second-chance drawing for tickets to NASCAR, NHRA and Kansas City Chiefs events and more.

As part of the celebration, S&W Supply will sponsor several events throughout the year, including the annual Wild West Fest held in July in Hays. As a sponsor, S&W will award VIP and regular fest tickets to several customers. In addition, the company will sponsor a night of racing in August at the RPM Speedway in Hays, where Federated spokesperson and dirt-track legend Ken Schrader will compete.

“Throughout the year, we are running a lot of promos and sponsoring events designed for our customers to win prizes, have fun and celebrate with us,” said Ryan Bickle, vice president of sales for S&W Supply. “We will finish the year as always with our annual Toys for Tots campaign, which seems to grow each year. We are excited about our anniversary and hope all our customers can share in the excitement.”

Established by Claude Sutter and his wife Helen (Bickle) Sutter during the years of the Great Depression and the Dust Bowl, the original company started out small, selling a limited number of automotive parts. After moving to Hays, the Sutters were joined by Don Wells and his wife Lyle (Bickle) Wells. The current company, S&W Supply, is named for the partnership between the Sutter and Wells Families.

In 1954, S&W Supply moved to its current Hays location. In the ensuing years, seven branch retail locations have been added throughout Western Kansas. As well as supplying automotive and heavy-duty parts, S&W Supply serves the industrial, agricultural and oilfield markets. In 1966, Warehouse Inc. was formed to serve as a wholesale automotive warehouse for the Western Kansas market and in 1985, the company joined forces with Federated.