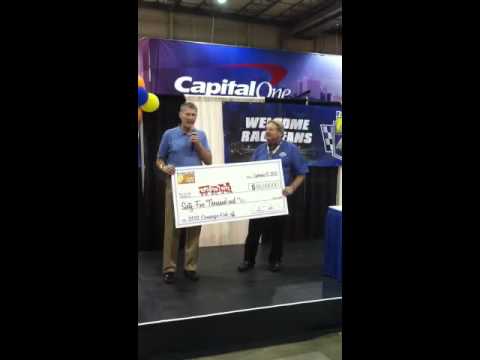 With the check presented Saturday, Toys for Tots will reach 6,500 kids to provide toys at Christmas.

CLICK HERE TO SEE A VIDEO OF THE CHECK PRESENTATION

"The Marine Corps and the Toys for Tots Foundation really believe that you’re judged by the company you keep," Grein said during the presentation of the check by Bishop. "We’re very, very pleased to keep the company of Federated Auto Parts. This is very important to us."

Inside Federated’s hospitality area on Saturday, a silent auction was held for a chance to meet NASCAR driver Tony Stewart at his trailer. Auction winners were Cliff Hovis, Rosemary Dean and Clara Godschalk, bringing in an additional $1,350 for Toys for Tots.

The $65,000 that Federated presented was raised in just 10 minutes at the group’s annual awards banquet held in April in Phoenix. Federated had auctioned off race packages, which included luxury section tickets and a helmet autographed by all the drivers.

With the check presented Saturday, Toys for Tots will reach 6,500 kids to provide toys at Christmas.

Toys for Tots, founded in 1947, provides toys to underprivileged kids during the holidays. Toys for Tots gave out 16.7 million toys to 7.2 million kids in 2010.

Republican presidential candidate Mitt Romney greeted hundreds of NASCAR fans inside an infield tent prior to the race. In addition to meeting Romney and Senate candidate George Allen, fans were treated to hot dogs. Romney greeted and shook hands with fans, many of whom had waited for more than two hours to see him.

After nearly three hours of rain delays, the race was finally completed with Clint Bowyer, driving the No. 15 5 Hour Energy Toyota Camry winning the race. It appeared the race would not take place, until track jet dryers began driving around the track.