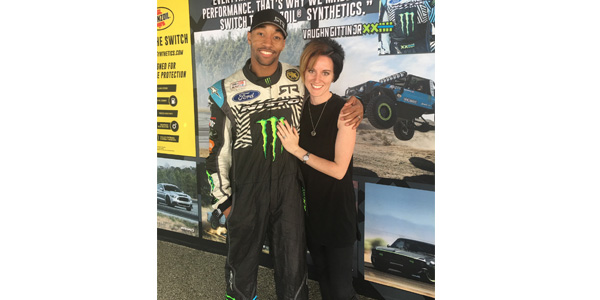 Robert Lewis won a trip to the first round of the 2019 Formula Drift championship in Long Beach, California.

Lewis received a trip to the first round of the 2019 Formula Drift championship in Long Beach, California. But the high point of the trip for Lewis was experiencing a ride-along with RTR Motorsports Drift team driver Vaughn Gittin Jr.

“I follow Vaughn on social media and that was where I saw the MAHLE promotion,” said Lewis. “Getting to go to Long Beach to see the cars was a thrill, but getting to actually ride in one was an experience I’ll never forget. You’re taught when you learn to drive to keep your eyes forward. But in these drift cars, you have to look out the side window. It’s amazing how easy Vaughn makes it look.”

Lewis has been a technician at Lakeland Ford for more than two years. While the dealership uses OE parts from Ford, he has noticed the MAHLE logo on many of the engine parts it uses.

“I know that MAHLE makes many of the original-equipment parts for Ford,” Lewis added. “The quality obviously has to be first rate.”

Vaughn Gittin Jr., founder of RTR Motorsports, is one of drifting’s most iconic figures, with the second-most wins in Formula Drift history (10) and 22 career podiums.

“When MAHLE approached RTR with the chance to collaborate on a really unique social contest, I was stoked about the opportunity,” Gittin Jr said. “It was really cool to hang out with Robert and his wife Vanessa and give him the ride of his life in a 1,200-horsepower Ford Mustang RTR Spec 5-D with MAHLE parts inside. I think this was an experience he will never forget.”

The trip to Long Beach was a return home for Lewis.

“I was born in Long Beach but hadn’t been there since I was a kid,” he sdaid. “It was fun to go back – it was so beautiful. I had never been to a Formula Drift event before – I couldn’t believe how down to earth all the drivers were. They really made me feel like I was a big part of the event.”

Jon Douglas, president of MAHLE Aftermarket North America, added: “We’re excited to give fans the opportunity to attend events like the Formula Drift, and to experience a once-in-a-lifetime ride-along with one of the best drivers in the series. We are happy Robert had such a great time and look forward to having him use MAHLE parts for his whole career.”

Advertisement
In this article:Formula Drift, promotions