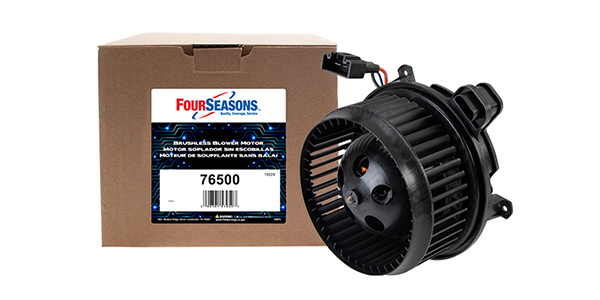 “BLDC motors are rapidly on the rise in the automotive aftermarket,” said Miller. “This sophisticated technology first appeared in the mid-1990s on GM applications and has gained popularity with OE over the years. Four Seasons’ commitment to providing our customers with a quality BLDC motor begins with our experienced manufacturing and engineering capabilities to ensure OE performance.”

Brushless motors are true to their name and utilize electronic sensored or sensorless commutation instead of a brush card. These cards degrade over time, causing motor failure. Brushless motors fulfill a greater range of applications than brushed motors and are more efficient by design, with characteristics such as quieter operation, greater speed control and less weight than the brushed design, said the company.

In between the evolution of the brushed design and brushless technology, the PWM controlled motor was developed. PWM is a digital signal generated from the vehicle’s engine control module capable of controlling and varying the speed of the electric motor. Brushed motors in conjunction with an attached PWM control module can be used in some brushless applications, however, a brushed motor cannot be used as a direct replacement in brushless applications. Attempting to do so can result in poor performance, damaged components or thermal events due to the differences in the electronics controlling the motor and HVAC system.

Advertisement
In this article:Four Seasons