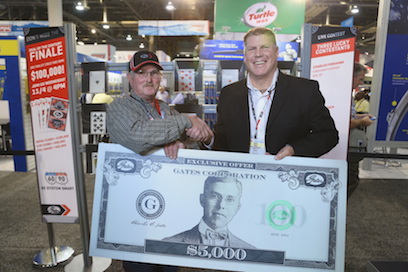 The Gates Century Bucks program was designed to encourage professional service centers to make the right system repair recommendations for their customers. 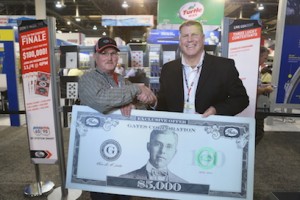 Charles Forehand (left), winner of the Gates Deal of the Century at AAPEX 2015, is pictured with Scott Howat, director of marketing and product management for Gates.

LAS VEGAS – Gates Corp. concluded its Century Bucks promotional program with Charles Forehand, owner of Forehand’s Garage in Ada, Okla., winning $5,000 in the “Deal of the Century” Finale event at the 2015 AAPEX Show.

In the live culmination of the program at the Gates AAPEX booth, Forehand drew two pairs, beating out the hands of John Welker, the owner of Texoma Fleet and Auto Repair in Wichita Falls,Texas and Marc Mondich, the manager/owner of K.M. Auto Care in Kennesaw, Georgia.

At the conclusion of the event, a smiling Forehand said, “I want to thanks Gates for the chance to be a part of the contest and for the award.” Forehand said the trip to AAPEX marked his first time at the show.

The three finalists in the program earned a free trip to Las Vegas from Gates, with the opportunity to win $100,000. Each contestant received a set of 20 envelopes containing one playing card apiece. After selecting five envelopes to make up their official hand, they opened the envelopes. Prizes were awarded based on the cards in their hand. A Royal Flush hand would have been worth $100,000.

“Gates has a history of innovation and superior service, and we strive for our marketing programs to be just as top-notch,” said Jack Ramsey, executive vice president of North American Aftermarket. “We congratulate Charles as the big winner and Marc and John for being a part of this program. Gates isn’t just about an exceptional product and brand, it’s about building business and doing the job right.”

The Gates Century Bucks program was designed to encourage professional service centers to make the right system repair recommendations for their customers. The promotion ran from May 1, 2015, to July 31, 2015, with over 100,000 entries received. Participants earned contest entries by installing Gates belts, tensioners and accessory component kits.

Gates Century Bucks Contest Concludes With Charles Forehand Of Ada, Okla., Winning $5,000 In The 'Deal Of Century' Finale At AAPEX 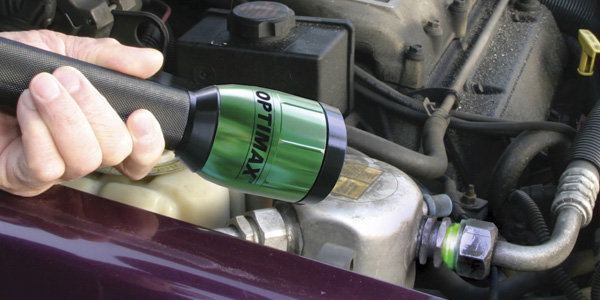