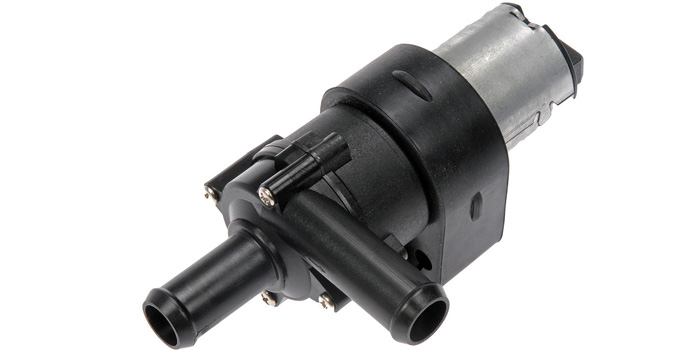 Like other electrical parts, problems with an electric water pump can occur for a variety of reasons other than a failure of the part itself. A bad wiring connection, corroded ground connection, low voltage supply or bad relay or fuse may prevent an auxiliary water pump from running. It’s important to rule out these possibilities before replacing the pump. 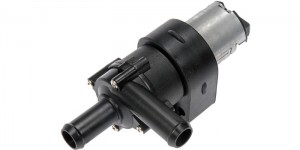 About one-third of the thermal energy produced by an internal combustion engine is absorbed by the engine heads and block as waste heat. Coolant in the engine absorbs the heat, so it can be carried to the radiator to prevent the engine from overheating. But, the coolant doesn’t circulate all by itself. A water pump is needed to keep the coolant flowing between the engine, radiator and heater.

Most engines have a belt-driven mechanical water pump because these pumps are relatively simple and reliable – provided the pump doesn’t leak and the belt doesn’t slip or break. The pump runs constantly as long as the engine is running, but stops turning when the engine shuts off. This creates a problem for late-model vehicles that have a fuel saving idle stop/start system.

An idle stop/start system will typically kill the engine if a vehicle is stopped at a traffic light for more than a preset number of seconds, then automatically restart the engine when the driver steps on the throttle. The issue isn’t so much a loss of engine cooling as it is a loss of heater output during cold weather because the water pump also circulates coolant to the core of the heater. So, to keep the coolant flowing when the engine isn’t running, many late-model hybrids and vehicles with stop/start systems also are equipped with an auxiliary electric water pump. An auxiliary electric water pump also may be used to provide cooling for a hybrid inverter/controller unit, and/or to increase coolant flow to the heater when the engine is idling, or when the vehicle is traveling at low speed.

Some of these original equipment auxiliary electric water pumps are very expensive – more than $500! Aftermarket pumps are usually a more affordable replacement option, and provide broader coverage with fewer SKUs.

Like other electrical parts, problems with an electric water pump can occur for a variety of reasons other than a failure of the part itself. A bad wiring connection, corroded ground connection, low voltage supply or bad relay or fuse may prevent an auxiliary water pump from running. It’s important to rule out these possibilities before replacing the pump. If the pump runs when it is jumped with 12 volts from the battery, the problem isn’t a bad pump but a fault in the wiring, voltage supply or control circuit.

Also, many of these pumps do not run continuously but only run when certain operating conditions exist. For example, on a Dodge Durango, the auxiliary electric water pump only runs when the vehicle speed is below 17 mph, the coolant temperature is above 150 degrees Fahrenheit (but less than 230 F), the heater blower is on (at any speed setting) and the heat temperature is above the halfway setting (60 percent heat). Under these conditions, the pump will run to improve coolant flow to the heater, but it will turn off as soon as vehicle is driven faster than 30 mph. Accurate diagnosis, therefore, depends on understanding how the auxiliary pump is supposed to operate.

A customer who is replacing an auxiliary electric water pump may also need antifreeze, new hoses and clamps, as well as cooling system flush. A new thermostat is also recommended if the engine has overheated.

Advertisement
In this article:Water Pump

Getting (Water) Pumped Up For The Automotive Aftermarket