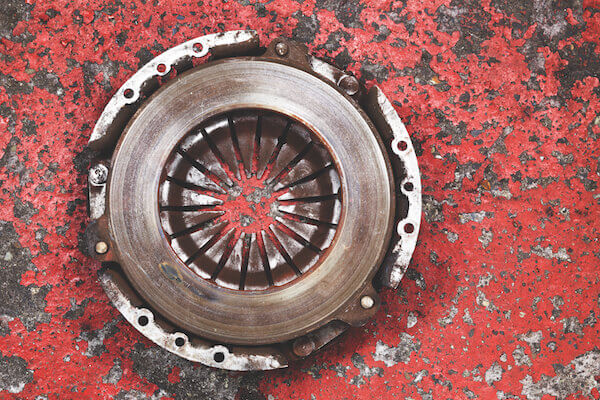 The hardest-working component in any vehicle with a manual transmission is the clutch. 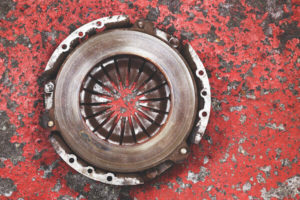 The hardest-working component in any vehicle with a manual transmission is the clutch. Every start, every stop and every gear change means the clutch is engaging and disengaging. The friction that is created between the clutch disc, pressure plate and flywheel when the clutch engages generates heat and wear, and the more the driver “rides” the clutch pedal or lets it slip excessively, the hotter the clutch disc gets and the faster it wears.

Anything that increases the load on the clutch also accelerates wear. This includes things like towing a heavy trailer, hauling heavy loads in a pickup truck, or spinning the tires in a muscle car. Performance engine mods that boost power also increase the demands on the clutch.

All clutches are rated to handle a certain amount of torque. The power rating of the clutch depends on the application, the power output of the engine and the type of driving or use the clutch will experience. Larger, heavier vehicles as well as performance vehicles typically have stronger or higher capacity clutches. The clutch disc and pressure plate may have a larger diameter to spread the load across a larger surface area. The linings on the clutch disc may be a higher temperature, more wear resistant friction material. The diaphragm spring or coil springs in the pressure plate may be stiffer so the clutch can hold heavier loads without slipping.

If a customer is replacing a stock high mileage clutch, a stock replacement kit will likely satisfy your customer’s needs. However, if the original clutch shows signs of overheating and burning, you may recommend upgrading to some type of performance clutch.

If a clutch is slipping because of oil contamination, the clutch disc should not be replaced until the oil leak has been identified and repaired.  This may require replacing a rear main crankshaft seal, a transmission input shaft seal or an intake manifold gasket set.

If an oil-contaminated clutch disc on a relatively low-mileage vehicle (say, less than 40,000 miles) needs to be replaced, the original pressure plate and release bearing can usually be reused provided they are in good condition and pass visual inspection.  But if the clutch disc, pressure plate or release bearing on a high-mileage vehicle has failed, it’s always a good idea to replace all three components at the same time. Why? Because replacing a clutch is a labor-intensive job, so it makes sense to replace everything at once so your customer doesn’t have to replace something else later on.

A clutch kit includes a new or remanufactured clutch disc, pressure plate and release bearing. A kit is the best way to go because all of the parts are sourced from the same supplier and are  matched so the installed height will be correct. Mismatched parts can sometimes cause engagement and release problems.

Sometimes a clutch won’t release because of a leaky or worn piston seal in the master clutch cylinder or slave cylinder, or because the hydraulic fluid has leaked out of the system. These parts may also have to be replaced.

On older vehicles that use a cable release mechanism, the clutch may not release if the cable is broken or misadjusted. A problem with the pivot fork that operates the release bearing can cause similar problems.

The condition of the flywheel also is important. It must be clean, smooth and flat for proper clutch operation, and free of cracks. Resurfacing or replacement may be required.