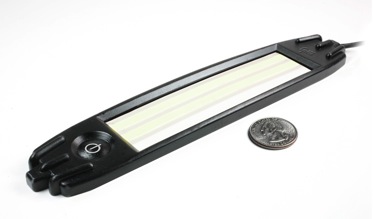 LightForm’s thin profile, operational robustness and adhesive mounting capabilities make it the perfect solution for HMMWV environments, according to Grote.

LightForm technology enabled Grote to create the lowest profile LED dome lamp possible. The lamps don’t project into the cabin, so they pose no hang-up risk or impediment to ingress or egress. The new dome lamp design doesn’t require a traditional bezel or lens that would add weight and thickness, nor does it need mounting fasteners that require holes to be drilled in interior surfaces.

The flexible lamps come prepared with an advanced, peel-and-stick adhesive backing that makes installation both simple and fast. Each kit includes front and rear lamps with independent on/off switches. Their thin, practical design makes them uniquely suited to the austere, utilitarian interior space of HMMWVs.

Grote has extensive experience with military lighting and has spent a considerable amount of time studying and designing other lighting systems for the HMMWV platform. During their time in the field with vehicles and crews, Grote realized that there was no viable interior lighting solution available, and that under certain circumstances, traditional lamp designs could pose an actual threat to passengers.

LightForm dome lamps are designed to provide HMMWV occupants with dual operational lighting modes. The lamps operate in a standard, Grote LED WhiteLight illumination mode, and a tactical or blackout mode, which uses a combination of red/white or blue/white color LEDs allowing soldiers to see outside the vehicle, while limiting their detection by opposing forces. The lamp’s multi-volt design meets the requirements for applicable MIL standards for electromagnetic interference, ESD, electrical transients, vibration, temperature, moisture and chemical resistance.

“In a theater of war, a traditional dome lamp could become a projectile and a source of injury if it is dislodged or fragmented by a concussion,” said Steve Green, business development manager for LightForm. “Our super-thin LightForm dome lamps are constructed from a fraction of the material used in a traditional dome lamp and are a fraction of their weight, and that lowers the potential for our lamp to cause injury.”

Though it is deceptively light and flexible, LightForm is one of the most rugged lighting products ever devised. The highly-advanced, thin-film, solid-state lighting device is water and shock resistant and can still function even after being severely damaged. The product will even continue to operate after being struck with a hammer.

Grote’s new LightForm HMMWV Retrofit Dome Lamp Kit will be available for shipment in the first quarter of 2012.