Despite appearance, any rubber engine mount is a wearing or expendable part. 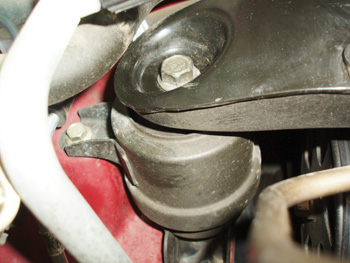 Many independent shops use the slower winter months to replace worn engines, which helps maintain the shop’s cash flow and helps squeeze some extra miles from a customer’s older, but basically sound vehicle. In some cases, the replacement might be a new original equipment crate engine, a remanufactured engine or even a used engine in good condition. Regardless of the type of engine being installed, it will likely require inspection and possible replacement of all rubber components including engine mounts.

Wear And Tear
Despite appearance, any rubber engine mount is a wearing or expendable part. While modern rubber components tend to endure extreme heat much better than older compounds, engine mounts still fail when exposed to ozone (a highly reactive air pollutant) and high underhood temperatures. In most cases, rubber engine mounts will harden, which increases the engine noise and vibration transmitted through the chassis to the passenger compartment.

But, when repeatedly soaked with hot engine oil, engine mounts will soften and lose their mechanical strength. Since most powertrain mounts are simply two pieces of steel laminated together by a tough rubber compound, the mount tends to separate, which can allow the engine to shift in its cradle. Engine mount separation can cause “torque-steer” on front-wheel drive (FWD) vehicles when power is applied to the drive train. In other cases, the engine might simply become dislocated, which can cause exhaust leaks, sticking throttles, clutch chatter and other operational complaints.

Mount Configurations
Transverse engines found in front-wheel drive (FWD) applications generally suspend the engine with one large front mount and two smaller rear mounts located each corner of the engine bell housing. In some FWD applications, a “dog bone” or torque strut might be bolted between the engine and the front radiator core support to absorb engine torque.

Doing the Math
Component accessibility is a major economic issue when repairs are performed in a commercial setting. A conventional RWD platform like a 2003 Ford Crown Victoria provides an excellent example of why it’s cheaper to replace mounts when the engine is being replaced. One popular labor guide lists five hours for replacing both front engine mounts. Removing and replacing the engine requires 16.7 hours of shop time. Obviously, replacing the mounts in pairs will cost the owner approximately one-third as much as replacing the complete engine. But, since the engine mounts must be exchanged from the old engine to the new, replacing with new adds only the cost of the mounts to the repair order. As with any expendable low-access component, it’s obviously far less expensive to replace during a major engine service than at sometime after.