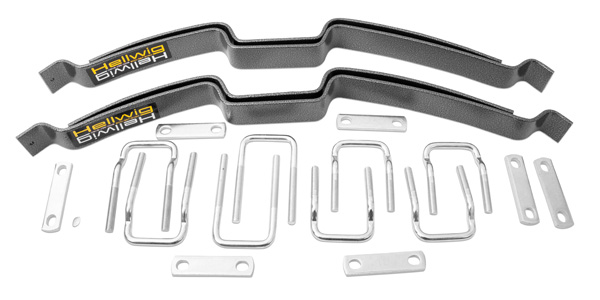 Hellwig Products, a California-based manufacturer of towing, hauling and performance suspension products, has released new Pro-Series helper springs for the 2017-2018 Mercedes-Benz Sprinter 2500 and 3500 vans, including two- and four-wheel-drive applications.

One of the most versatile and popular cargo vans on the road today, the Mercedes-Benz Sprinter has a multitude of engine and chassis options and has a maximum payload of between 6,521 and 7,500 pounds. While these vans may be rated for relatively heavy loads from the factory, the weight of a heavy trailer or uneven cargo loads still can cause the vehicles to sag in the rear, negatively affecting driving dynamics. With the addition of the Hellwig Pro-Series helper springs, a more favorable balance of weight to the front tires is restored, resulting in better handling, braking and safety of the vehicle, according to Hellwig Products.

The Pro-Series helper springs for the 2017-2018 Sprinter (P/N 61614) feature a two-leaf stack rated for up to 2,500 pounds of additional level load-carrying capacity. The powder-coated, bolt-on helper springs improve tow/haul performance by keeping the vehicle level even as loads approach the manufacturer’s GVWR. The progressive rate of the Pro-Series helper spring only activates when a load is present, allowing the vehicle to drive like stock when not towing or hauling cargo. The user also can further dial-in the load support for an uneven side load using the adjustable U-bolts.

The helper springs fit the 2017-2018 Mercedes-Benz Sprinter cutaway chassis, cargo van and passenger van and only apply to the multi-leaf versions of the Sprinter.