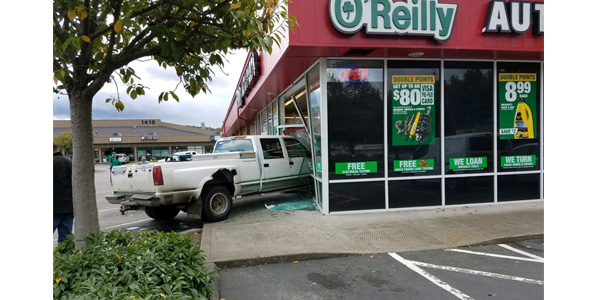 Fortunately, no one was injured, and the store reopened the same day.

When a vehicle crashes into an auto parts store, online commenters like to joke that the driver must have been in need of new brakes.

That wasn’t exactly the case when a pickup truck smashed into an O’Reilly Auto Parts store in Puyallup, Washington. However, the driver was there to replace a homemade component that ultimately caused the accident, according to the store manager.

“The gentleman had a homemade starter switch on a toggle switch,” Manager Jake Thompson explained. “The switch went bad, and he was here to replace that toggle switch.”

When the driver closed the truck door, it triggered a short in the switch.

“The truck fired up, it was in first gear and it crawled right through the window,” Thompson said.

Fortunately, no one was injured, and the store reopened the same day.

“It basically took out three panes of window,” Thompson added. “It didn’t even damage any product.”

Oddly enough, a similar incident happened at the same store about seven years ago, according to the manager.

“A truck came right through the same panes of glass,” Thompson explained.

Advertisement
In this article:Auto Parts, Retail