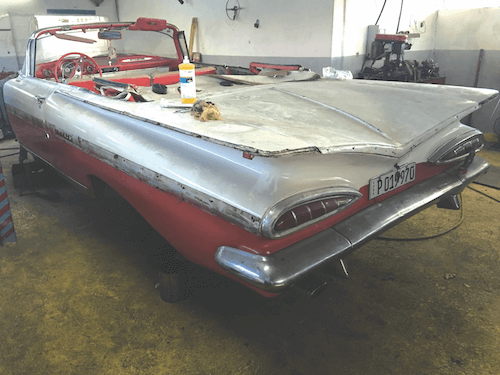 In Havana, a scrap yard becomes a treasure chest.

HAVANA — It was 5:05 p.m. and techs were still turning wrenches as if it were the beginning of the day right after they had the first coffee. I have been on plenty sales calls in my career visiting jobbers, dealers, fleets, stores and shops. I have done this in countless markets within the U.S. and abroad. And in every one of those markets, there was something in common that happens at 5:05 p.m.: bière, bier, cerveza … beer! But, not in Julio’s shop.

It’s not that Julio prohibits it, or they do not drink any; it’s that his guys just don’t care to stop work for it. For you see, these guys are more like artists than techs. More like inventors, than wrench heads: these guys are mechanics in Cuba. And in Cuba, you just don’t turn wrenches; you invent, improvise, adapt, forge, create – in short you dream up!

It was my first day in Havana. I had dreamt of visiting my family’s homeland for decades and once I finally got there, what is the first thing I do after leaving the airport? I made a sales call! Nobody forced me to go sell; it’s just what I do. Si Señor, I went straight to Julio’s place. With the recent changes in Cuba allowing self starters to start their own businesses, Julio and his family have hatched a wonderful new enterprise in Havana that restores, maintains and rents the best, and I mean, the best, Yank Tanks that roam all of Cuba. These cars, and he manages 22 of them, are so beautiful and well-loved, they even have names like Lola and Nadine.

Don’t get me wrong, for the classic car purists out there, these cars are probably an abomination; since none of them, not one, is restored to its original condition. But, for Cuba, Julio’s cars are gems. Gems not to be admired from afar in a showroom or at a show; but, driven, often and fast. With modern upgrades like digital radios, digital RPM gauges and dual-evap A/C (more on that later). 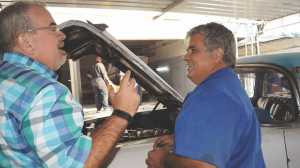 Julio is kind of a celebrity in the States. He has been showcased by the likes of the New York Times, Miami Herald and PBS Television. When Secretary of State John Kerry visited Cuba as the highest-ranking officer to do so in more than 50 years to reopen the U.S. Embassy in Havana, he rode around Old Havana in Nadine.

Back to the beer, though. I was trying to figure out how come these guys plowed through, dry, that afternoon. It took me a while to figure it out. It’s not the overtime (they don’t get any). It’s a deep love for the job. It’s a way to deal with the angst of everyday life in Cuba.

As the afternoon wore on and I got to learn more about Julio’s business, I realized that for these guys, working on these cars is the way the exorcise their demons; it is how they find a bit of happiness in their hard lives in Cuba, by exploring their creative outlets. And creative they are.

A scrap yard is a treasure chest for these guys. Give any of them a piece of metal and a torch and they can reverse engineer any crash part they need. I saw masterpieces created with no stamping presses, nor laser-guided models, that fit the vehicles with tolerances OE quality control gurus would envy. I saw creativity that allows these geniuses to retrofit a Hyundai diesel forklift engine to run in a ‘57 Chevy BelAir. 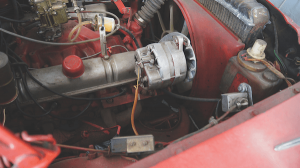 I saw a tweaked modern transmission being fooled into thinking it was getting a code from a non-existing ECM from a home-soldered micro-motherboard that sent the correct code to engage the transmission at all speeds. I saw another Bel Air with no tinted windows running an A/C system with a way too small Korean compressor. To maximize the heat exchange, it ran air through two evaporators; one in the engine compartment and one behind the passenger seat. The set up kept the car as cool as old man Hemingway in the Cuban tropical heat sipping a mojito.

Julio has become a great friend who opened his business and his heart to truly show me the Cuba I yearned to see. The Cuba that lives in the efforts of guys likes his techs, his drivers, his translators and his family. Hard-working folks that find joy without many of the things we all get so easily just 90 miles north of Havana. Next time we can’t get our hands on a part no one has, maybe we can think of Julio, skip a beer and keep hammering on.

Mandy Aguilar is a regional vice president for Jacksonville, Fla.-based The Parts House.

In Cuba, Automotive Technicians And Artists Have A Lot In Common