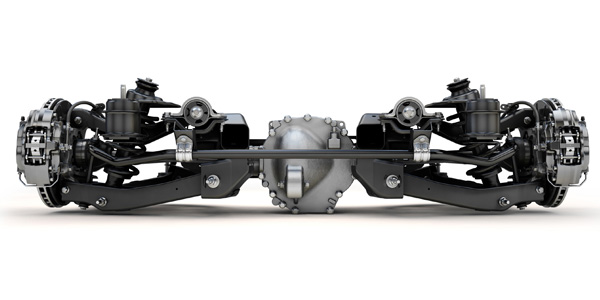 Independent rear suspensions have many advantages over solid (beam) axle designs, including ride quality, handling and adjustability of alignment angles.

Independent rear suspensions have many advantages over solid (beam) axle designs, including ride quality, handling and adjustability of alignment angles.

Live axle applications with leaf springs have effectively zero adjustability, and rely on the four frame mounting points of the leaves to square everything up on the rear end. Collision or other frame damage may affect the placement of the rear axle, throwing the vehicle’s thrust angle out of specification.

Thrust angle can be visualized like the letter “T” drawn across the rear axle and the vehicle centerline, with the axle representing the “top” of the T. If the “leg” of the T is to the left (driver’s side) of center, the thrust angle is considered negative. If it falls to the right of center, the thrust angle is considered positive. Either condition can affect handling, causing “dog-tracking” (the vehicle seems to be aimed a little “sideways” when viewed from the front or rear). This leads to understeer and oversteer, depending on the direction of the angle when entering turns.

Dead axles (the rear beam axle on a FWD vehicle) may be shimmed at the rear spindles using disc-shaped alignment shims, which, due to their varying thickness profile, allow both camber and toe adjustment of an OEM non-adjustable design. These shim kits are available through many reputable aftermarket vendors as well as some specialty companies. Incorrect use of these shims can lead to an imbalance of individual rear toe (which also affects thrust angle), and shouldn’t be considered a DIY item. Most alignment products are of little use to the weekend warrior, and the majority of your requests will come from your commercial customers anyway.

A proper four-wheel alignment begins with the rear alignment. The rear axle must be set square to the vehicle centerline, so all four wheels are parallel to the centerline and to each other. Front-wheel measurements are based off their relationship to the rear end, and if the rear axle is cocked, the front end will be too.

Multi-link independent rear suspensions have a great deal of adjustability designed into them, but this also makes them susceptible to misalignment due to wear, physical damage and improper service. More and more AWD vehicles are using a rear subframe or “cradle” to locate the rear differential and suspension components. The cradle is bolted to the underside of the unibody, and the suspension in turn is connected to the cradle. A shifted, loose or damaged cradle can alter the thrust angle, toe setting and even the camber, depending on the nature of the defect. Verifying thrust angle might be even more important in this type of suspension due to the number of moving parts as compared to a leaf-sprung vehicle … the chances of something being knocked out of place increase with each additional attaching point.

Finally, wear on individual suspension components can cause alignment issues. Worn bushings, weak or broken coil springs, and bent components can throw alignment angles out of specification. These conditions allow movement beyond the limits of the engineered design. While static measurements taken on an alignment rack may indicate a vehicle being within advertised specifications, under load and when subjected to road forces, these angles may increase beyond their intended limits, leading to poor handling, accelerated tire wear and customer complaints.