Keeping Your Cool With R-1234yf 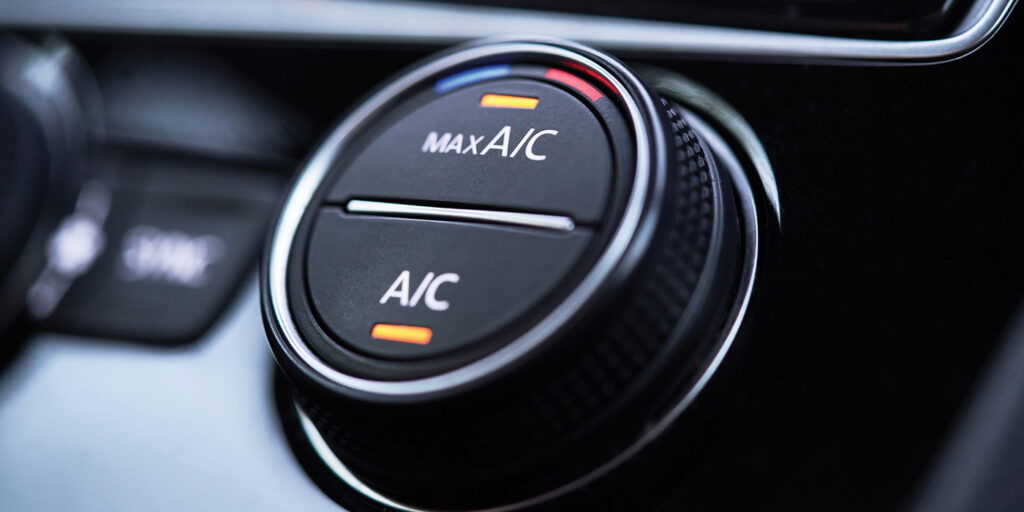 The process of cooling the inside of a vehicle is the same process that’s used to cool your home, and they both include the same basic elements: a compressor, a condenser, an evaporator and a system of hoses or tubes. In both situations, the A/C system isn’t producing fresh cold air. Instead, the system is taking existing hot air, removing the heat and moisture, and recirculating it as cold air.

While all of the components play an important role, the process wouldn’t be possible without refrigerant. The reason the system uses refrigerant instead of say, water, is because refrigerant has a very low boiling point. So, it’s easy to boil the refrigerant into a vapor – which enables it to quickly remove heat from the air – and to repeat this process over and over.

Up until the mid-1990s, the most widely used refrigerant was CFC-12, which most people refer to as R-12. The EPA considers R-12 an ozone-depleting chemical and a potent greenhouse gas.

In the United States, R-12 has been banned for use in newly manufactured vehicles since 1994, but you might come across some pre-1994 cars and trucks that still use it if they haven’t been retrofitted to a non-ozone-depleting refrigerant. And if they haven’t, you might want to recommend a retrofit parts kit if your store carries them.

Vehicles produced after 1994 use HFC-134a, more commonly known as R-134a. While R-134a isn’t considered an ozone-depleting refrigerant, it is a hydrofluorocarbon, which is a group that generally poses a very high potential to contribute to climate change, according to the EPA. This is commonly referred to as GWP, or global-warming potential. Automakers began transitioning to R-134a with 1992 model-year vehicles, and by the 1995 model year, all new vehicles sold with air conditioners in the United States used R-134a.

Starting in 2012, the automakers began shifting to HFO-1234yf, more commonly known as R-1234yf. This is a far more environmentally friendly alternative to the aforementioned refrigerants. While R-1234yf is mildly flammable, it isn’t considered an ozone-depleting refrigerant. According to the EPA website, R-1234yf has a GWP of 4, compared to 1,430 for R-134a.

The Chemours Company, which manufacturers Opteon YF refrigerant for automotive A/C systems, estimates that more than 80 million light-duty vehicles on the road today in the United States were factory-filled with R-1234yf refrigerant. That number will continue to grow, as Chemours estimates that 95% of vehicles manufactured for sale in 2022 will use R-1234yf as part of their original-equipment design.

“The advantage with R-1234yf is that it has a zero ozone-depletion potential, and it has an exceptionally low global-warming potential,” says Christina Spalding, business development manager, thermal & specialized solutions, at Chemours. “This is why we’ve seen a significant number of U.S. car manufacturers converge on R-1234yf, even though fundamentally there’s no mandate requiring them to do so.”

Chrysler was an early adopter of R-1234yf, going all the way back to the 2014 model year. The list of automakers using R-1234yf in vehicle models in the United States today includes Audi, BMW, Ford, General Motors, Honda, Hyundai, Kia, Mercedes-Benz, Subaru, Tesla, Toyota, Volkswagen and others.

It’s just a matter of time before R-1234yf is found in the majority of vehicles in the overall U.S. fleet, explains Constantine Giannaris, North American mobile marketing consultant for thermal & specialized solutions at Chemours.

“We encourage retail stores and shop owners to make the investment [in R-1234yf supplies] sooner rather than later to begin reaping the benefits now and into the future,” he adds.

While working on R-1234yf systems isn’t much different from R-134a systems in terms of operation or theory, identifying the refrigerant and recharging the system have some new twists.

If your store isn’t seeing a lot of demand for R-1234yf yet, an easy way to dip your toe in the water is to stock R-1234yf cans. Chemours offers its Opteon YF automotive refrigerant in self-sealing 12-ounce and 28-ounce cans. Purchasing R-1234yf in a can doesn’t require EPA 609 Technician Training and Certification, which means anyone can purchase them. However, DIY demand for R-1234yf is small compared to the more mature R-134a DIY market.

Even so, you might have some DIY customers who want to “top off” their R-1234yf systems. In these situations, make sure your customers know that they won’t be able to use an R-134a charging hose to connect to the service port on an R-1234yf vehicle. While R-134a and R-1234yf air-conditioning systems are very similar in terms of their overall design, the respective service ports are different, to prevent the refrigerants from being mixed. To recharge an R-1234yf system, your DIY customers will need a gauge-and-hose set with hose couplers that fit an R-1234yf service port – another potential sales opportunity for your store.

That said, you also might want to tell your customers that simply topping off the refrigerant might not solve the problem if the air conditioning isn’t working. It could be a mechanical or electrical issue, or a refrigerant leak (the most common cause of cooling problems). If a refrigerant leak is suspected, you can recommend an ultraviolet leak-detection dye or an electronic leak-detector tool. There are some kits out there that include the dye, the injection gun, UV glasses and even a fluorescent light to help them find the leak.

Chemours Opteon YF offers 10-pound and 25-pound cylinders for use with RRR machines. The cylinders are for professional technicians, as they need EPA Section 609 certification to purchase them. The 10-pound cylinders by far are the most popular, according to Giannaris.

With approximately 15 million R-1234yf passenger vehicles coming out of their factory warranty each year, aftermarket demand for R-1234yf refills and service is growing steadily. For parts stores that haven’t started stocking R-1234yf cylinders yet, Spalding recommends “planting the seeds” with their DIFM customers.

“If you’re selling cylinders of R-134a, those are potential customers for cylinders of R-1234yf,” Spalding says. “Ask your customers if they are seeing the increase in vehicles containing yf at their shops. I think there is a lot that a retailer can bring to their customers in terms of educating them about how the market is changing and how the fleet is changing. If you recognize a customer has been purchasing R-134a from you for quite some time, asking them how you can help them transition to R-1234yf can go a long way.”