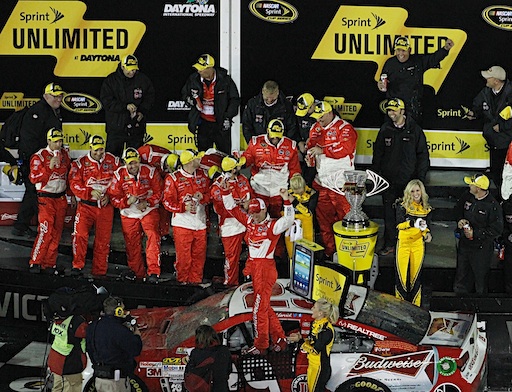 Racing for the first time in NASCAR’s new Generation-6 car, Harvick started the 30-lap opening segment from 17th position and avoided a nine-car accident to advance into the lead for the 25-lap Segment 2. He ran in the top five throughout the next segment and regained the lead heading into the closing, 20-lap sprint to the checkered flag. It was in the final segment when the Champion-powered No. 29 car really showed its stuff, as Harvick led flag to flag, holding off a series of late challenges for a 0.149-second margin of victory.

“Kevin and the RCR (Richard Childress Racing) team were in mid-season form – fast on the track with an excellent chassis setup, and fast in each of their pit stops,” said Federal-Mogul Motorsports Director Tim Nelson. “We knew he would have challenges in the final laps, but Kevin played it smart and the 29 car had the ‘Performance Driven’ power from Champion to pull away.”

The NASCAR Sprint Cup season officially begins at 1 p.m. ET on Sunday with the Daytona 500.
As official spokesperson for the Champion brand, Harvick has helped spearhead several innovative programs designed to introduce the brand’s latest “Performance Driven” technologies to millions of racing enthusiasts and other consumers. One of the world’s most recognized and respected brands, Champion today represents an extensive offering of advanced products, including world-class Champion spark plugs, Champion wiper blades and Champion chemical additives for automotive and small-engine applications.

For more information regarding Champion spark plugs and related products, visit www.AlwaysaChampion.com. To find the right Champion plug for any engine, simply log on to Federal-Mogul’s convenient www.FMe-cat.com electronic catalog.