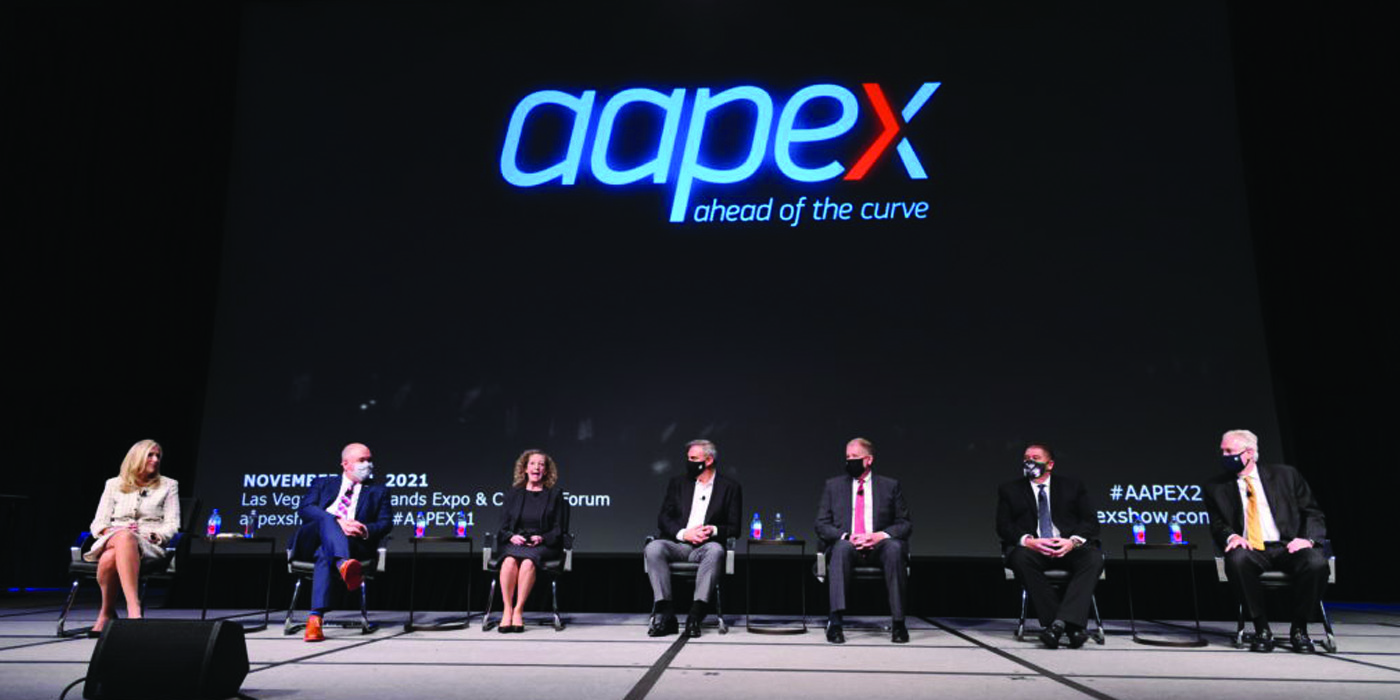 The events of the past year and a half or so have given us plenty to talk about in the automotive aftermarket, and there was no shortage of conversation points for the Nov. 2 buyer panel that kicked off AAPEX in Las Vegas.

Moderator Karyn Schoenbart, CEO of The NPD Group, opened the keynote panel by asking the participants – a who’s who of executives from aftermarket retailers and warehouse distributors – to reflect on what it meant to gather in person at AAPEX for the first time since 2019. The consensus was that the face-to-face interaction was a welcome departure from the endless videoconference calls of the pandemic.

“Other than getting together in person and collaborating on how we can better serve our customers, to me the big message is a big sign that says: ‘We are open for business,’” AutoZone CEO Bill Rhodes responded. “We are here. If we can come to Las Vegas to be together, we can darn sure be together in our stores, our distribution centers and our support centers.”

The conversation then pivoted to leadership lessons learned from the pandemic.

“Throughout the whole pandemic, the first priority for us was to maintain the health and well-being of our employees. And as a leader, you not only have to be inspirational, but you also have to be compassionate. At the same time, you have to continue to push for performance.”

Rhodes said he learned two key lessons: “the importance of courage, and making sure you’re making decisions that align with your values.” He noted that in March 2020, AutoZone decided to give its employees two extra weeks of vacation.

“That was an $80 million decision that we made in 48 hours,” Rhodes added. “But we made it align with our values, and frankly it was one of the proudest moments I’ve ever had of our leadership team for making a decision like that.”

Despite surveys indicating the consumers overwhelmingly support the notion of being able to choose where they take their vehicles for repair and maintenance, Schoenbart noted that there are indications that Right to Repair isn’t resonating with technicians and others on the front lines of the aftermarket. How, then, can the aftermarket get this important message to the shop floor?

Kevin Herron, president and COO of Genuine Parts Co.’s U.S. Automotive Parts Group, summed it up with “education and support.”

“It’s not just an automotive issue,” Herron added. “It exists in the medical industry; it exists in the agricultural business. There are other industries that are going through this. And we need to educate all the way through the organization what Right to Repair is and why it’s so critical to the aftermarket going forward.”

Herron and other leaders on the stage emphasized that winning the Right to Repair battle will require an industrywide effort. At a grassroots level, they suggested involving co-workers, family and friends in the fight; supporting political action committees (PACs); and developing relationships with your representatives in Congress.

“I had a fairly mediocre civics teacher in eighth grade, and yet I do not remember one minute of his lesson plan talking about the importance of supporting PACs, or the importance of a personal relationship with each of our congresspeople,” quipped Corey Bartlett, CEO of Automotive Parts Headquarters. “And yet that’s where we find ourselves today. How a bill becomes a law – the little cartoon – that’s all great, but the important piece is that we all get involved.”

There’s also an ongoing need to provide financial support for the aftermarket’s lobbying and PR efforts. The automakers reportedly raised more than $25 million to oppose the 2020 Right to Repair ballot measure in Massachusetts (which voters approved by a wide margin). Rhodes, a longtime board member for the Coalition for Auto Repair Equality (CARE), noted that Advance, AutoZone, NAPA and O’Reilly and their supplier partners stepped up with multi-million-dollar contributions to support the Massachusetts campaign, as did Auto Care and AASA.

“This isn’t a one-time-contribution deal,” added Greg Johnson, CEO of O’Reilly Auto Parts. “This fight continues, and we’re going to continue to reach out to you for your support. We just ask that you plan for that in your budgeting process.”

The conversation then shifted to what Schoenbart described as “the new abnormal” – that is, a business environment in which supply chain disruptions, labor shortages, inflation and other challenges have become the norm. At the same time, 2020 was a record year for some of the major parts retailers, and demand has continued to be strong in 2021.

“In terms of availability, getting the right part to the right place at the right time has been difficult in the last year and a half,” said Tom Greco, CEO of Advance Auto Parts. “For all of the suppliers in the room, I really want to thank you for what you’ve had to deal with. I’ve been responsible for manufacturing facilities in my career, and I know how difficult it was to run those lines and make those parts and products for us in the environment you were dealing with.”

Likewise, Rhodes asserted that AutoZone’s “biggest challenge has been our in-stock positions and availability.”

“I really appreciate how we all have taken collaboration in a Zoom or Teams environment to a very different level than we ever have before,” Rhodes added. “But I believe and I know you believe that this is going to be a long journey. This is a long, long way from being over, and in some respects, we’ve played the game of whack-a-mole for the last 18 months. I suspect it’s going to be that way for an extended period of time.”

The technician shortage isn’t anything new, but the aftermarket is feeling the pain in other areas too. Johnson noted that O’Reilly “can’t hire fast enough to keep up with the volume” in its distribution centers – a challenge that undoubtedly isn’t exclusive to O’Reilly. Widespread labor shortages in businesses across the nation have brought the issue into sharper focus.

“The number of customers that talk about being one tech short or  two tech shorts or three techs short is frightening,” Bartlett said. “So we need to do everything we can to help attract technicians to the aftermarket.”

To address the labor shortage, Herron encouraged the more than 900 audience members “to embrace the next generation of technicians.”

“We need to stay aligned with the trade schools,” Herron added. “We need to change the image of the technician going forward. We need to create apprentice-type programs similar to what we do with our NAPA Auto Care Centers, and develop that next level of technician that’s going to keep our industry going forward.”

Among the other hot topics on the docket was the potential impact of electric vehicles on the automotive aftermarket.

For years now, we’ve been hearing about plans and projections for EVs. However, the buzz around EVs seems to be hitting a fever pitch. In September 2020, for example, California Gov. Gavin Newsom issued an executive order to develop regulations mandating that 100% of in-state sales of new passenger cars and trucks are zero-emissions by 2035. In May, Ford said it anticipates that its EV sales will account for 40% of its global vehicle volume by 2030.

Widespread adoption of EVs – whenever that comes – will be a challenge, Godschalk asserted, “and we need to be prepared for that challenge.”

“There’s no doubt that the electric vehicles are going to be a threat to the aftermarket,” Godschalk said. “I think that the original-equipment automakers are going to program those vehicles to entice the consumer to take that vehicle back to the OEM for repair. That’s just a fact. And we’re going to lose out on many of the things that bring that consumer into our shops.

The aftermarket needs to be “very, very proactive” in making sure that shops have the equipment and training to service EVs, Godschalk added. She also said adoption of EVs underscores the importance of promulgating federal legislation that allows consumers to share their vehicles’ telematics data with their repair providers of choice.

Noting that the aftermarket has been “written off” in the past when new technologies – from carburetors to drum brakes – have emerged, Herron asserted: “I think you have to be excited about the evolution of our industry.”

“Will categories change? Absolutely. There’s no doubt about it,” Herron added. “But new categories will come into the marketplace. … This industry is resilient. It’s made its way through many changes over the decades, and I think the next 20 to 30 years can be even more exciting.

Despite some unprecedented challenges, the panelists struck an optimistic tone about the near-term future of the aftermarket. When asked if the post-pandemic aftermarket will be bigger or smaller than the pre-pandemic aftermarket, Johnson answered: “That’s an easy one: definitely bigger.”

He pointed to the rebound in miles driven and “the lack of new vehicles entering the car parc” as positive indicators for the continued growth of the aftermarket.

“I’m very optimistic about our industry, and I always have been throughout my career,” Johnson said. “We’re all blessed to work in an industry that’s very resilient. We do well in economic downturns, we do well when the economy is strong. These last two years have been a challenge, and you’ve seen what our industry has been able to do and the performance of our industry overall.”

Advertisement
In this article:AAPEX, Right To Repair