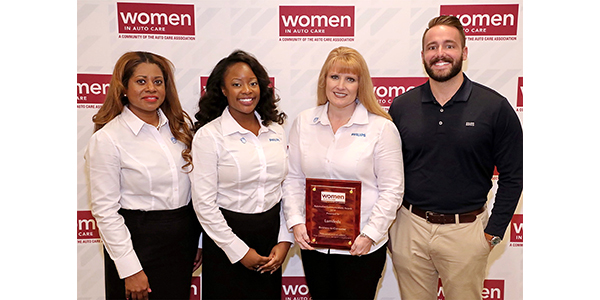 Lumileds won the award for its highly informative segment on the television program “Designing Spaces.”

Lumileds won the award for its highly informative segment on the award-winning network television program “Designing Spaces.” The segment promoted the Philips X-tremeVision upgrade headlights to a female-centered audience and was broadcast on the Lifetime Network in the spring of 2018.

Lumileds chose to partner with Designing Spaces in order to more effectively communicate and deliver a valuable driving safety message to the female demographic, a market segment that is often overlooked in the automotive aftermarket, the company said.

The Philips segment features a mother who is concerned with her visibility while driving at night to pick up her son. Both mother and son are real consumers and not actors. The mother explains that she struggles to see clearly when driving at night, as her eyes have begun to deteriorate. A Philips brand representative explains the safety benefits of upgrading her vehicle’s headlights with Philips XtremeVision upgrades and installs the bulbs in her vehicle, so she can see the difference herself.

Ann-Marie Hines, Lumileds senior marketing manager, said of the award, “We are incredibly excited to receive this prestigious Automotive Communications Award from the Women in Auto Care. We created this segment with Designing Spaces to help educate consumers, specifically women, about the importance of upgrading their vehicle headlights.”

Advertisement
In this article:AAPEX, Lumileds, Philips, Women in Auto Care